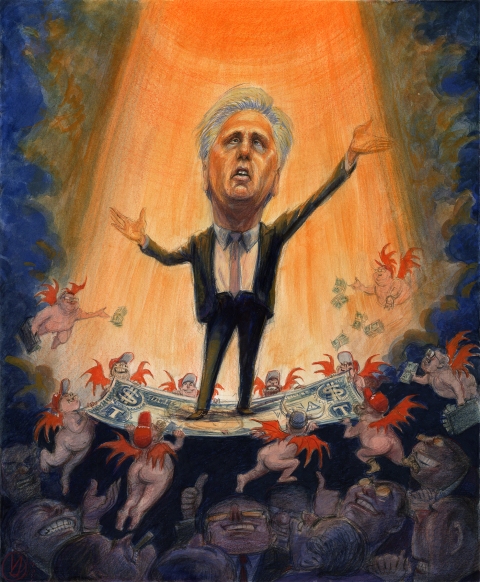 “My countrymen, we have reached a turning point in our history. The choice is yours. Shall we venture into this brave new world, bright with possibilities, or retreat to the safety of our familiar but sterile past? I am for crossing the frontier.” — Ferdinand Marcos

Mike Pence and Kevin McCarthy have a lot in common. They got as far as they got in politics because the Republican party has been in a downward spiral for quite some time. Neither one of them is a leader, they’re both followers. They’re both yes men. Like the Inspector Renault character in Casablanca, they’re self seeking opportunists, “going which way the wind blows.”

Pence played Judas to Donald Trump, at least in Trump’s eyes, by refusing to pick up the cues given and play Trump’s scene on January 6, which was to refuse to recognize certain electoral votes and turn the matter over to other electors and most probably, the House of Representatives, when all was said and done.

Make no mistake, Pence did extensive research on whether he could make a plausible argument that he had a loophole in the constitution to do such a thing. Pence searched high and low for plausible deniability, even consulting with the likes of Dan Quayle, famously known as the dumbest vice president in history. Quayle told him to forget about it, he had no wiggle room, let alone what Trump and his allies were proposing.

So Pence played the only hand he plausibly could play. Pence will be remembered for coming down on the right side of history and I’m glad he did, because nobody but nobody knows what would have happened if he would have folded. My only point is that I think he did the right thing for the wrong reasons. He refused to indulge Trump not because he was brave, but because he couldn’t find a way to cover his ass.

And who knows what role Mother played in all of this? Maybe she informed him of the simple fact that if Pence went rogue that it was going to be his ass out there hanging in the breeze, more so than Trump’s. Trump was known for being somebody to break all the rules and burn it all down. It behooved Pence to hang onto his appeal as safe Republican daddy for when the day came that the country burned out on the Trump novelty and wanted to go back to the GOP establishment ways.

Kevin McCarthy saw all this go down and in real time no less. And he has direct evidence of what Trump said at the time. Listen to this 3:20 clip.

And it’s not just January 6 that the Committee wants McCarthy to testify about, according to the Washington Post:

In his letter on Wednesday, Thompson cites McCarthy’s conversation with Trump on Jan. 11, where McCarthy “may also have discussed with President Trump the potential he would face a censure resolution, impeachment, or removal under the 25th Amendment,” Thompson wrote. “It also appears that you may have identified other possible options, including President Trump’s immediate resignation from office.”

Conversations with Trump’s legal team, Rep. Jim Jordan (R-Ohio), and others about McCarthy’s “continued objections to the electoral votes from multiple states late in the evening of January 6th and into the morning of January 7th” are also of interest to the committee, Thompson wrote.

And it isn’t mentioned in this story, but you know that the three-hour gap between McCarthy imploring Trump to do something and Trump actually putting out a video to call off his MAGAs is going to come up. There is no way that it cannot.

So McCarthy is now the pushmi pullyou. He’s got to either go the way of Scott Perry and Jim Jordan and refuse to cooperate with the J6 Committee, or he’s got to tell them what he knows and risk two things: 1) committing perjury and 2) incurring the wrath of the MAGAs.

This leads McCarthy to the moment of truth that Mike Pence faced and likely with the same result that Pence got, i.e., being booed and excommunicated by MAGAs. And that is, to be a MAGA or to be an establishment GOPer. That is the question before McCarthy as we speak.

Pence chose to be the establishment Republican. You saw where that got him and we will never know what the results of him going full MAGA and supporting Trump would have been. In all fairness, Pence was already finished in politics when Trump threw him an extra few years and a couple of book deals by putting him on the GOP ticket.

McCarthy has observed what happened to Pence. and McCarthy knows how dicey his own ascent through the party ranks have been. So which way does he jump now?

He’s wondering right now, unless I miss my guess, which option is likely to get him the farthest towards his goal of becoming House Speaker, folding, recanting, doing what he suggested to Trump on January 6, let it go, in essence? Or, going full MAGA, joining the ranks not only of Jordan and Perry, but in truth the ranks of Boebert, Greene, Gaetz, Gosar, Cawthorn and a list which is already far too long, of GOP fringe extremists.

All I think we can safely say right now is that he’s going nuts.

But consider this, while you’re boiling the water and dumping in the political tea leaves. Kevin McCarthy is also a lot like Mark Meadows, insofar as he folds to pressure easily and makes really bad strategic decisions without much thought. It was a dreadful strategic decision that McCarthy decided to pull out of the J6 Committee because now he’s not privy to what they know. That’s what will keep him awake tonight.

And he doesn’t have forever to put together his strategy. All of the media outlets have left inquiry at his office about what his response is to Bennie Thompson’s letter.

Which will it be? Do a Mike Pence or go full MAGA? I think he’ll do a Mike Pence. I don’t think McCarthy has a sociopathic enough personality to go full MAGA. It takes a certain breed and I don’t think he’s it. He’s too much of a fence sitter and a waffler. Plus, he’s already been shat upon by the likes of Marjorie Taylor Greene. I can’t see him running off to her camp any time soon.

I think that at the end of the day McCarthy will realize what so many in Trump’s orbit have. Everything Trump Touches Dies, the latest casualty being McCarthy’s dream of being Speaker.