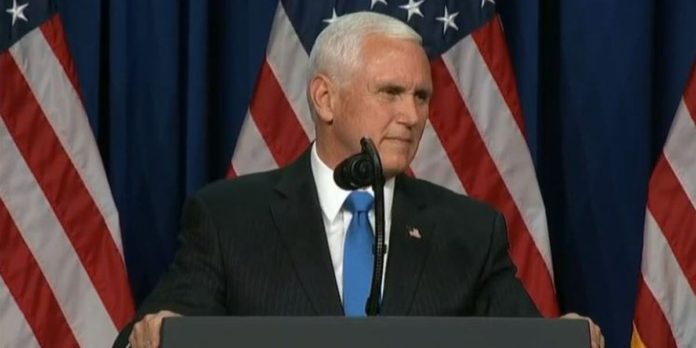 This article is actually the companion article to the one I posted a couple of days ago, about Donald Trump being the Angel of Death. Personally, I had a strong feeling that I was putting at least a couple of my toes over a line when I put that up, and I truly appreciate the support I got in the comments.

Rest easy, I am not about to accuse Mickey Mouse Pence of being an angel of death. Not only does he lack the creative drive, he’s just to lazy and bone stupid. I think that a more appropriate title for Pence would be the Handmaiden of Disaster.

Let me explain. From the earliest days of the Covid crisis, it became clear and apparent that His Lowness had absolutely no interest in dealing with the crisis. He looked at it as a purely political problem, with the economy he required for reelection as the hostage. Instead, Trump downplayed the virus at every turn.

In order to completely wash his hands of all aspects of the crisis as quickly as possible, Trump made two declarations in short order. First, he declared the formation of Operation Warp Speed, a governmental full court press to develop a vaccine as quickly as humanly possible. except it was all bullshit. Both Pfizer as well as Moderna, when they submitted their vaccines to the FDA for emergency approval, released public statements highlighting the fact that they took no money or assistance from Operation warp Speed, the vaccines were purely in those products.

Now obviously, nobody with 12 firing neurons ever thought that Pence was going to run an honest shop, and buck the boss by promoting common sense measures like mask wearing, social distancing, and hand washing. But he didn’t have to. There was something he could do as the Czar of the task force, and in fact, his failure to do so basically constituted political malpractice.

Stick with me here, it all makes sense in the end. As we headed into the fall of 2020, the apex of the presidential campaign, it became more and more clear that by years end, there would be at least one, and possibly as many as three highly effective vaccines ready for use. This could be a political boon for Trump, especially if one or more of them got approval before election day. And here is where Pence fucked up.

Look, nobody ever expected Pence to buck the official Trump line on the coronavirus. But there was still something constructive he could do with his task force. The last I remember, going into election day, both Trump and Pence were confident that they were going to get a second term. Shit, the last time I checked on Sunday at CPAC, Trump was still swearing that he won! And here’s where the wicket gets sticky.

Let’s just say that Trump and Pence won on November 3rd. By the first week of December, they would have two FDA approved vaccines, all ready for shipping and use. All they had to do was to roll out the plan to get the vaccines shipped, and start getting them into American arms.

But there wasn’t any plan to distribute and administer the fucking vaccines! Because Mike Pence is nothing more or less than a whining, sniveling, incompetent prick. You don’t want to fight the boss on common sense solutions and precautions, fine, Trump was an asshole when he was pissed, which was daily.

But sweet jumping Jesus, you had almost an entire year heading a task force on the virus! Even if you won, sooner or later, there would be vaccines available to treat people! Why in the hell didn’t you use that year to have your task force put together an intelligent, common sense, workable plan to get the vaccines out of warehouses, and into peoples arms? And in a second term, the sole responsibility of wisely using these vaccines to end the national nightmare would be yours!

This is why the nation is so lucky that Biden was elected on November 3rd. Because of Trump obstruction, there was no actual transition. And when Biden and his team came in on inauguration day, they were horrified to find that not only were the vaccine supplies not what Trump claimed they were, there was absolutely no plan in place to get shots into arms.

It has taken President Biden 43 days. 43 days to use the War Powers Act to increase the production of needed raw materials for the vaccine. 43 days for the Biden administration to create from whole cloth a national distribution network, and make it work. 43 days to get the National Guard, along with other military resources out there in the field, setting up and working mass vaccination sites. 43 days to ramp up production of enough vaccine to vaccinate every American who wants a shot by the end of May. 43 days.

And Vice President Mike Pence had almost an entire calendar year to to do nothing more or less than the same damn job. A full staff. An entire room full of experts. The entire resources of the United States government at his disposal. And for an entire year, he did jack shit. Shame on you Mike Pence. You’re a national disgrace!