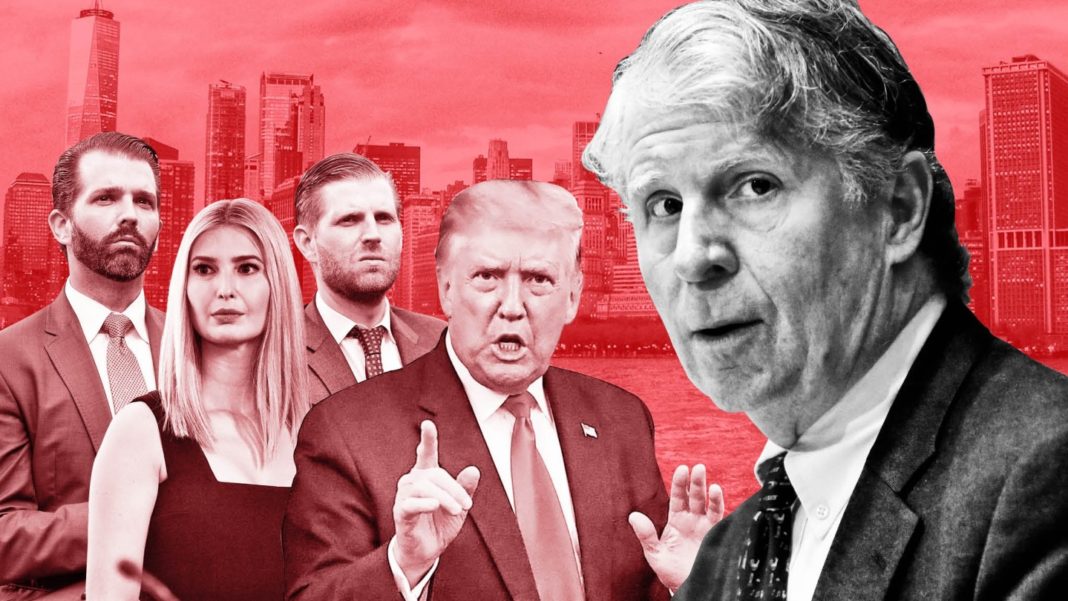 Cyrus Vance is leaving his post next week. Unless an indictment issues from his office between now and the 31st, the new person assuming Vance’s duties will be the one to indict Trump — and that is how the shot is being called these days, that a Trump indictment is forthcoming from the Manhattan D.A.’s office.

But, there is the matter of a letter written by Vance to Trump in 2016 and that has gotten some tongues to wagging.

You actually wrote this sentence to Donald Trump and signed your name to it?

"Realizing how important law enforcement and criminal justice issues are to you…" pic.twitter.com/iNb3YHYYtC

With that out of the way, let’s look at the obvious question which is, “Is Cyrus Vance compromised in some way?” And the only answer I have is most unsatisfactory, I.Don’t.Know. 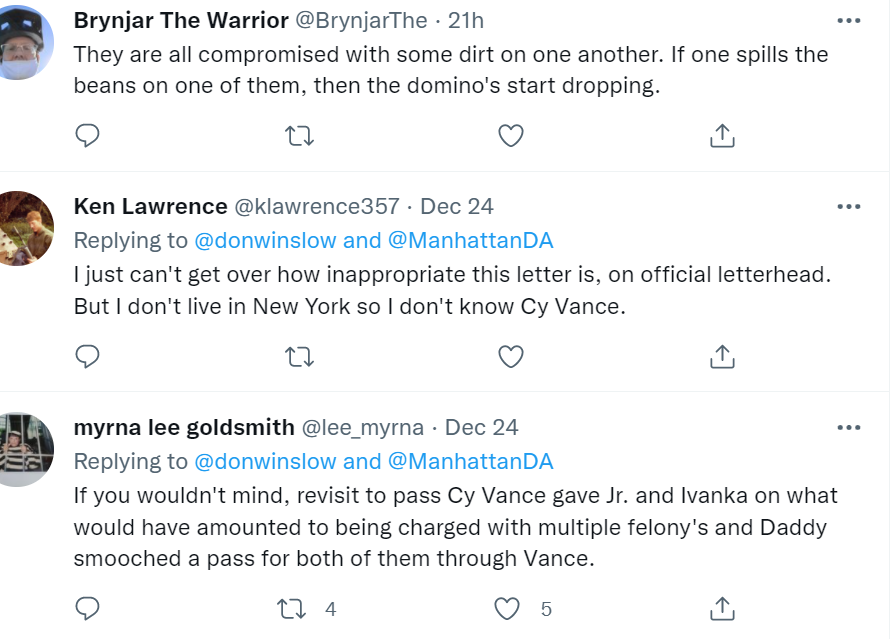 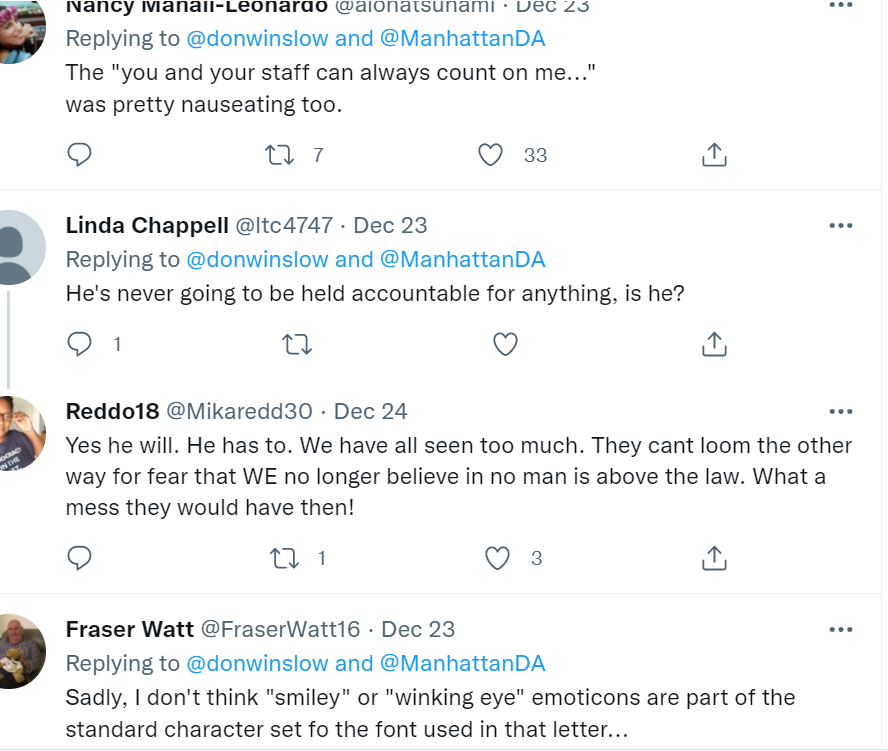 Here’s the story from ProPublica in 2017, in collaboration with WNYC and The New Yorker. This article distills the saga of how Donald Trump Jr. and Ivanka, the “beautiful family” were on the verge of being indicted for felony fraud, until Marc Kasowitz, (remember him? Dead ringer for space alien Exeter in This Island Earth) Trump’s lawyer, walked in with a big check and the problem went away.

There was “no doubt” that the Trump children “approved, knew of, agreed to, and intentionally inflated the numbers to make more sales,” one person who saw the emails told us. “They knew it was wrong.”

In 2010, when the Major Economic Crimes Bureau of the D.A.’s office opened an investigation of the siblings, the Trump Organization had hired several top New York criminal defense lawyers to represent Donald Jr. and Ivanka. These attorneys had met with prosecutors in the bureau several times. They conceded that their clients had made exaggerated claims, but argued that the overstatements didn’t amount to criminal misconduct. Still, the case dragged on. In a meeting with the defense team, Donald Trump, Sr., expressed frustration that the investigation had not been closed. Soon after, his longtime personal lawyer, Marc Kasowitz entered the case.

Kasowitz, who by then had been the elder Donald Trump’s attorney for a decade, is primarily a civil litigator with little experience in criminal matters. But in 2012, Kasowitz donated $25,000 to the reelection campaign of Manhattan District Attorney Cyrus Vance Jr., making Kasowitz one of Vance’s largest donors. Kasowitz decided to bypass the lower level prosecutors and went directly to Vance to ask that the investigation be dropped.

On May 16, 2012, Kasowitz visited Vance’s office at One Hogan Place in downtown Manhattan — a faded edifice made famous by the television show, “Law & Order.” Dan Alonso, the chief assistant district attorney, and Adam Kaufmann, the chief of the investigative division, were also at the meeting, but no one from the Major Economic Crimes Bureau attended. Kasowitz did not introduce any new arguments or facts during his session. He simply repeated the arguments that the other defense lawyers had been making for months.

Ultimately, Vance overruled his own prosecutors. Three months after the meeting, he told them to drop the case. Kasowitz subsequently boasted to colleagues about representing the Trump children, according to two people. He said that the case was “really dangerous,” one person said, and that it was “amazing I got them off.” (Kasowitz denied making such a statement.)

Vance defended his decision. “I did not at the time believe beyond a reasonable doubt that a crime had been committed,” he told us. “I had to make a call and I made the call, and I think I made the right call.”

Just before the 2012 meeting, Vance’s campaign had returned Kasowitz’s $25,000 contribution, in keeping with what Vance describes as standard practice when a donor has a case before his office. Kasowitz “had no influence and his contributions had no influence whatsoever on my decision-making in the case,” Vance said.

But less than six months after the D.A.’s office dropped the case, Kasowitz made an even larger donation to Vance’s campaign, and helped raise more from others — eventually, a total of more than $50,000. After being asked about these donations as part of the reporting for this article — more than four years after the fact — Vance said he now plans to give back Kasowitz’s second contribution, too. “I don’t want the money to be a millstone around anybody’s neck, including the office’s,” he said.

Talk about musical money bags. The money walks in, then it looks bad that it did so, so they give the money back, then an even bigger sum comes in again, and then that too, gets returned. I don’t know about you, but I’m getting dizzy. Now, who exactly had what money when the music stopped? Anybody?

But even a lawyer in the Trump camp acknowledges that the way the case was resolved was unusual. “Dropping the case was reasonable,” said Paul Grand, a partner at Morvillo Abramowitz who was part of the Trump SoHo defense team. “The manner in which it was accomplished is curious.”

Grand, who was a partner of Vance’s when the district attorney was in private practice, said he did not believe that the D.A.’s office had evidence of criminal misconduct by the Trump children. But the meeting between Vance and Kasowitz “didn’t have an air you’d like,” he said. “If you and I were district attorney and you knew that a subject of an investigation was represented by two or three well-thought-of lawyers in town, and all of a sudden someone who was a contributor to your campaign showed up on your doorstep, and the regular lawyers are nowhere to be seen, you’d think about how you’d want to proceed.”

This is the 2017 article that you want to read, so hit the link and read it in full. I would republish it here, but ProPublica specifies that this article is outside the Creative Commons license.

Again, I don’t know how to call this shot of Vance’s letter, but I feel very safe in saying that this matter of the Vance/Trump kids is something you are going to hear about more in the future.

Maybe it’s as simple as Vance dragged things out to the point where he could turn them over to somebody else who doesn’t appear tainted and let that person run with the ball. That is my best speculation for now, until more is known.