The strange and the wicked will be convening in Springfield, Missouri this weekend. Yes, friends, this is Cyber Symposium Deux, the sequel to Cyber Symposium One and Dumb, which took place last August in Sioux Falls, South Dakota. Just as the swallows return to Capistrano every year, Mike Lindell feels a compulsion to end the dog days of summer tilting at his imaginary windmills and dreaming the impossible dream of reinstating Donald Trump in the White House.

Even Jenna Ellis told him that it was impossible to “reinstall” Trump. I like the word “reinstall.” Makes me think of a faulty orange washing machine that kept leaking and exploding in the middle of the night and the people who owned the house finally threw it out — and now some lunatic neighbor wants to “reinstall” it.

Respectfully, Mike Lindell should go back to law school… for the first time. 🤷🏼‍♀️ #WarRoom

Here’s a hot link to a tape of Jenna talking to Sebastian Gorka about how “reinstalling” Trump is against the constitution. Nevertheless, she will appear on Saturday on the panel in Springfield. What’s interesting about that is that she’s supposed to be in Georgia to testify there in the Fulton County D.A.’s investigation. MSN:

Mike Lindell said that Jenna Ellis will appear at his election fraud summit despite facing a subpoena in the Georgia election interference case.

MyPillow CEO Mike Lindell confirmed on Wednesday that former Trump attorney Jenna Ellis will speak at his latest election fraud “summit” after she received a subpoena from a grand jury investigating election interference by former President Donald Trump and his allies in Georgia.

In a Tuesday ruling, Judge Gregory Lammons in Fort Collins, Colorado ordered Jenna Ellis to comply with a subpoena issued by the Georgia grand jury.

Lindell also repeated his former claims that the event would include a “trial of the [voting] machines.”

The moment has finally arrived when Lindell is going to change the world by presenting 12 hours of “evidence” on Sat and 12 more on Sunday to hundreds of millions of viewers on Lindell TV: “I’m telling you everybody, it’s over for them!” pic.twitter.com/CLmRfaJIkm

Here’s another hot link to Lindell’s promo for this Great Event. THIS RUNS THREE MINUTES AND IS RIDICULOUS. I WOULD EMBED IF I COULD.. And here’s Trumpty’s endorsement. 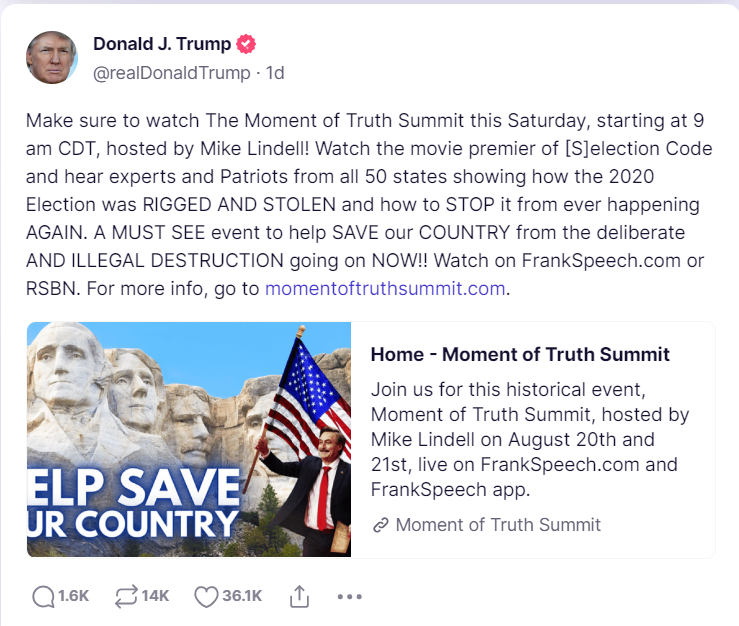 Let’s hope that in twelve hours there are at least a few good laughs. Moment Of Truth. Sigh. You know what I’m calling this event, right? 2001 Mules: A Space Cadet Odyssey.