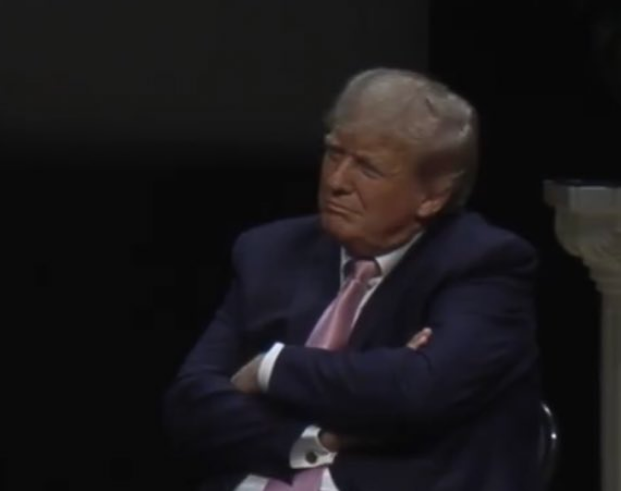 I know you’re so tired of me saying, “You can’t make this stuff up.” But can you blame me, honestly? Every single day there is something unbelievable happening in America and it’s usually on the other side of the cultural divide.

Donald Trump was there and he was not all that thrilled looking. As a matter of fact, if I was a director and asked Trump, as an actor, “give me impatient and bored” and he copped the posture he copped here, I would consider it a good piece of work. That is what he conveys, for sure. Take a look at more scenes from this debacle.

Trump’s memorial service for Diamond of Diamond & Silk continues with more love and adoration for .. Donald Trump: “She had a boyfriend. We would talk about him all of the time. His name was President Donald J Trump!” pic.twitter.com/IAKp9jUu7d

You see how this is now, the yous and mes think that George Clooney or Brad Pitt, guys on that level, are hot. But in MAGA world, they burn in the night for Trump. Jesus take the wheel.

And yes, of course, it gets worse.

The rock star makes his entrance.

This is him a minute before bored on his ass, I mean prostrate with grief.

This memorial service for Diamond has been very emotional for Trump. pic.twitter.com/aoVftZKERb

Let’s be big now folks, okay? The man is obviously shattered, let’s wish him a swift recovery for his terrible loss.

Diamond’s father has been going on and on forever rambling & telling stories that never seem to have any ending & right now he is talking about baking cinnamon rolls after something about his garden and also not wanting a male housekeeper while Trump is sitting there wanting out!

I can tell you one thing for sure, because he said it himself 5 times, Trump was definitely NOT expecting to sit through 3+ hours of hymns and stories at Diamond’s memorial service today: “They said about 15-20 minutes, in and out. This is a little longer than 15 minutes, right?” pic.twitter.com/IZgRioU3Iq

And here’s the part you were waiting for, where Trump talks about himself. You knew this was coming, right?

Trump gives a heartwarming and emotional tribute to Diamond at her funeral, saying countries are emptying out their prisons and mental institutions into the US, talking about gas prices, inflation, the federal budget and various other things. pic.twitter.com/neuFaSCv01

And Trump got to this thrilling conclusion.

Trump concludes his moving eulogy to Diamond by saying the 2020 election was stolen from him, and Republicans have to get a lot tougher so they can swamp the Democrats in 2024 so they can fix the country. pic.twitter.com/vJ3TE0PdNz

I don’t know about you, but that is exactly how I want people to speak at a memorial service of mine, about the stolen election of 2020. I believe I’ll incorporate that instruction in my will this very night.