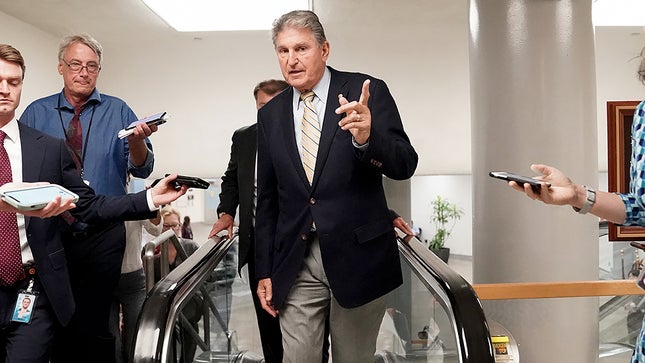 First of all, a good day to you both, and thanks for your time and attention. When it comes to politics, you’ve both had a pretty good run playing the same game, portraying yourselves as the last of the dying Blue Dog Democrat breed. Nothing is further from the truth. Jon Tester is a Democratic Senator from Montana, which is about as red as it gets. And closer to home, Senator Manchin, your current Governor, a statewide office, was elected as a Democrat before he switched parties in the time of Trump. And Senator Sinema, democratic Senator Mark Kelly beat appointed Martha McSally in 2020 after you trounced her in 2018. There’s nothing superhuman about either one of you, you had the right message, and got the most votes. That’s how politics works. At least until 2024 if the GOP gets their way.

Now, this is the part where I normally sop up to you, talking about how much I respect your skills and intelligence, but not this time. In fact, I have no respect for either one of you. In fact I find you shameless hypocrites of the highest order, for starters, both of you, in your senseless defense of the racist filibuster rule, love to wax poetic about the sanctity of Minority Rights in the Senate. What are the two of you blathering on about?

It’s not all that complicated. The simple fact of the matter is that minorities don’t have rights! That’s why it sucks to be in the minority. What happens if an unarmed black motorist, running away from a white cop, throws his arms in the air and screams, Don’t shoot! I have minority rights! Most likely? BLM takes to the streets en masse, and we get more Benjamin Crump than we can handle for two weeks.

But let’s stick to politics, your chosen schtick. Look around you. The Illinois state Senate doesn’t have a filibuster rule. And neither does any other state in the union. But let’s not stop, we’re on a roll. There is no western style democracy anywhere in the world that has a filibuster in their upper chamber to ensure Minority Rights. In fact that’s the entire premise of American democracy, Majority Rule.

Hey! Don’t go running off, we’re just getting started, and this is my forum! Here’s an even better reason why the two of you are monumental hypocrites. You both swear fealty to the filibuster because it allows the minority to force more debate and negotiation, leading finally to a bipartisan result. Which is a situation that neither one of you ever personally experienced!

A long time ago, in a Senate far away, the Senate used to run that way. And you know why? Because the freakin’ filibuster was almost never used! The minority party voted to allow the bill to the floor for debate, and then used tactics to force more debate, and hopefully negotiation, which often worked, because both sides were still interested in governing. Nut you two would know nothing about that, and here’s why.

Senator Manchin, you came to the Senate in 2010. And you, Senator Sinema came to the Senate in 2018. But neither one of you has ever personally witnessed, nor been a part of, a successful filibuster leading to bipartisanship. Because in 2008, President Barack Obama was elected. And Mitch McConnell’s first, impulsive knee jerk reaction was to make Obama a 1 term President, by making him a miserable failure in his first term. Both of you have spent your entire careers in a Senate where the filibuster is used solely as a method of obstruction, to keep anything from getting done. So you can both ditch that pie-in-the-sky shit about minority rights. It’s minority abuse.

Pop Quiz! When is the last time that the minority party in the Senate forced a change to the filibuster rule? Short answer. Never! Because the minority party doesn’t control the podium, and they can’t call for rule changes. And besides, they don’t have 51 votes to pass it, or they wouldn’t be in the minority. Senator Harry Reid was surgical in his changes, he only allowed a simple majority vote for cabinet members and non SCOTUS judges. It was McConnell who used the filibuster to keep Merrick Garland from getting even a hearing, much less a floor vote for more than 300 days. And then he carved out the filibuster to allow him to pack the court with 3 Trump numbskulls.

But now playtime is over. It’s over because our very fundamental voting rights are at risk, and neither Biden nor Schumer has the time to play kiddie games with either of you. Until now, both of you have gotten away with it because you were able to put solemn looks on your special interest faces, and gravely intone how you oppose any changes to the filibuster rules to ensure minority rights and forced bipartisanship. And you got away with it because the standing rule is to never bring a bill to the floor if you don’t have the votes to pass it. Neither of you put anything on the line.

But the paradigm has now changed, there is no more time to lose. Senate Majority Leader Schumer is going to call the voting rights bill to the floor for a vote to open floor debate. And if the GOP filibusters it, he will, by MLK Day, call a vote to change the Senate rules by a simple majority vote. And then the games are over.

And simply because I’m a vindictive son of a bitch, when Schumer is done with the two voting rights bills, I hope like hell he brings the Build Back Better bill to the floor for a vote. And once again, as boxer Joe Louis used to say, there will be Nowhere to run, and nowhere to hide. They will call your name, and you’ll have to cast a likely nationally televised vote. For or against something the vast majority of the people you purport to serve support. What’ll it be?

As I said, you’ve had a nice long run. You’ve had reporters chasing you all over Capitol Hill, and countless media pundits opining on the air about what hard asses you are. But now, as my favorite Sesame Street meme says, Shit just got real! Time to flip your hole card. What do you really believe?