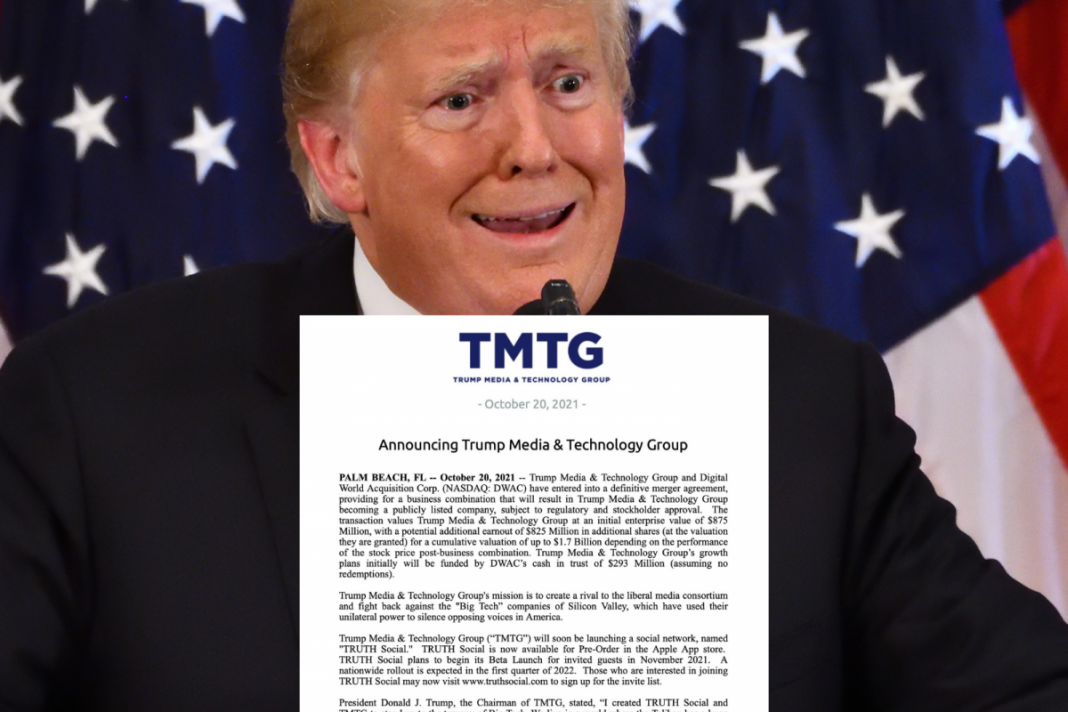 All indicators are that Donald Trump is really, and we mean really, serious about making Truth Social fly. He never used to post on Truth Social but he is now bestirring himself more and more frequently to put up a small squib here and there. He’s also very upset that the Google Playstore doesn’t have the requisite app for Android users (which is 40% of people carrying a smart phone these days) and is wondering if Google is “out to fuck him” as noted in a previous piece today.

Shoring up the idea that Trump really wants to make a go of Truth Social is a report of a filing of a document which is required before Trump can take his platform public and sell stock in it. As the Los Angeles Times notes sagaciously, “Some followers of Trumpworld may find that the S-4 registration statement filed Monday in anticipation of the Trump-SPAC merger makes hilarious reading” and this is usually not the case. But then it is usually not the case that somebody with Trump’s track record of bankruptcies, lawsuits, liquidations, you name it, keeps coming back for more, trying to borrow and raise more and more money.

And so, if you have contemplated doing business with Donald Trump, here are some things you might want to know. This is sure to get an accountant chugging Maalox and give a financial analyst a migraine.

Let’s delve instead into the Trump-related risks.

“A number of companies that were associated with President Trump have filed for bankruptcy,” the document states. “There can be no assurances that TMTG [that is, Trump Media & Technology Group] will not also become bankrupt.”

The S-4 also observes that “President Trump is involved in numerous lawsuits and other matters that could damage his reputation, cause him to be distracted from the business or could force him to resign from TMTG’s board of directors.”

Among them, the document specifies that “a congressional committee is investigating President Trump’s role, if any, in violence at the United States Capitol on January 6, 2021. Two groups of U.S. Capitol Police officers, in two separate lawsuits, have sued President Trump for allegedly inciting riots on that date.” […]

Further, the S-4 mentions other “ongoing litigation involving President Trump related to the 2020 election,” including a lawsuit filed by the NAACP Legal Defense & Educational Fund, and a criminal investigation launched by “the Fulton County, Georgia, District Attorney’s office … into President Trump’s alleged interference in the presidential election.”

Also, “the U.S. House of Representatives Committee on Oversight and Reform is investigating President Trump’s alleged destruction and removal of classified documents and White House records, as well as potential inaccurate financial statements filed by the Trump Organization in relation to the Trump Hotel in Washington, D.C. ”

Separate investigations have been launched by “the New York County (Manhattan) District Attorney, the New York Attorney General, and the Westchester County District Attorney to determine if the Trump Organization made false valuations of property to avoid tax liability and for other financial benefits.”

And it goes on. Two words, if you’re inclined to invest with Donald Trump. Caveat emptor.