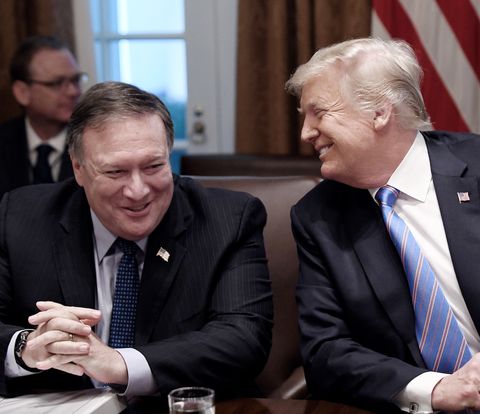 As you have no doubt observed, there are some old school Republicans, chiefly Mike Pence and Mike Pompeo, who are dedicated to moving on from Donald Trump and from the insanity of that era. To the rest of us, who are thinking beings, that plays out as “too little too late” but maybe we should look on the bright side, “better late than never.”

Here is Pompeo blasting Trump’s insistence that the mail-in ballots in Pennsylvania are somehow tainted and being used to steal an election.

Maybe it will be great news for them, Mike, but Trump doesn’t see it that way.

And Pompeo isn’t the only one laughing at Trump. Raw Story:

SiriusXM radio host and columnist Dean Obeidallah offered a prediction of Trump’s antics. “Trump is now getting ready to claim voter fraud in Pennsylvania—in reality, Trump should be getting ready to head to the prison’s lunchroom for feeding time.”

In a tweet also posted on Wednesday, David Axelrod, a known Democratic strategist who also served as senior adviser to former President Barack Obama, offered a stinging assessment of Trump’s remarks describing him as a “one-trick pony.”

“Trump, a one-trick pony, is playing the fraud card again, urging Oz to act like a Wizard and just declare himself the winner in PA!” Axelrod tweeted along with a link to a Washington Post article with details about the Pennsylvania election results.

The New Yorker’s John Cassidy also weighed in with a critical response. “You can’t keep a good seditionist down,” Cassidy tweeted along with a link to one of his pieces related to Trump’s antics titled, “Trump Brings His Big Lie Playbook to the GOP Primaries.”

But despite Trump’s antics, political analyst Tom O’Brien noted that even a Trump endorsement didn’t help some Republican candidates cross the finish line.

And here’s the bottom line. Trump’s “power” has diminished. He’s like Anakin Skywalker out there in the lava field bragging about “my powers have increased” just before he goes ass over teakettle into the flaming mess and becomes Darth Vader. “Trump’s ‘power’ = 1/3 of the vote in a Republican primary,” says his biographer, O’Brien. “Trump couldn’t push Oz across the finish line so now he’s advising crying fraud.”

That’s the size of it and it makes perfect sense. Trump doesn’t give a tinker’s damn about Mehmet Oz, here’s merely upset that he doesn’t look good enough. He hoped, or expected Oz, to come out with flying colors, with his endorsement and the backing of Fox News. Now that that hasn’t happened, he’s got to fall back on his old playbook.

My personal opinion is that Trump didn’t want to endorse Madison Cawthorn and only did so at the very end because Cawthorn begged him to. I also think that now Trump regrets it. Remember how Trump thinks: at the end of the day all he cares about is himself and how he looked that day. That’s it. Nobody else and nothing else matters.