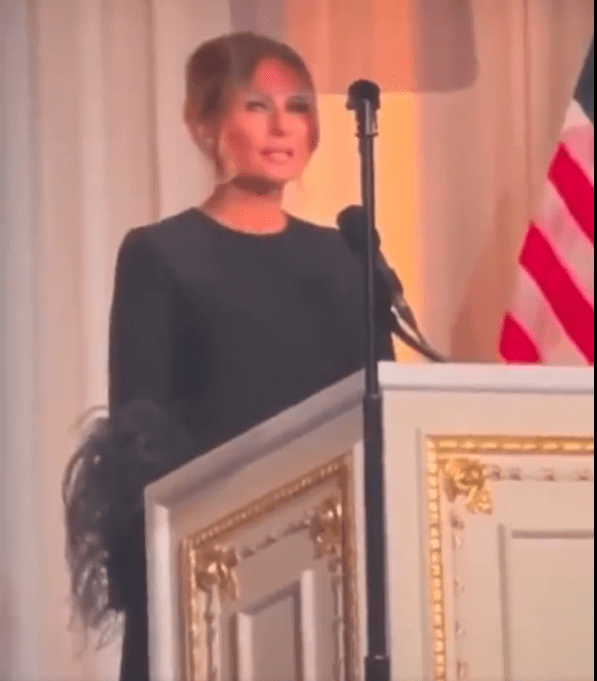 Imagine Eva Gabor trying to play Marie Curie and you start to get the flavor of this thing. I wish I had a transcript of this. I’ve listened to the beginning eight times and I can’t figure out what she’s saying. It sounds like “I emphasized legislation” — how exactly, pray tell? She drew a circle in lipstick around a portion of the congressional record and slipped it under a congressman’s door with a note: “Vote for theees, honey, and I’ll make it worth your while.”

I am so honestly lost here. See if you can understand WTF she’s saying.

Portion of Melania Trump’s acceptance speech last night after receiving the 2021 ‘Spirit of Lincoln Award’ from the Log Cabin Republicans for “encouraging individual responsibility, and ensuring equality under the law.” pic.twitter.com/D6AypTudWU

She created something that “elevated important issues.” What, an in-box wearing clog heels? If you could understand that part of the sentence, you’d have it nailed.

See this is what I’ve been saying, how the culture war we’re in is like the TV show Counterpart. Melania’s counterpart in the next dimension is a woman of intelligence, knowledge and social conscience, and she did these things. The woman in this parallel universe is dumb as a rock and likely never heard of the things that she’s now claiming to have assiduously worked for as First Lady. All we know for sure is that she “worked” her “ass off” on the “fucking Chreeesmuss decorations.” And we have the photo ops to prove it, so that we believe. And I remember her destroying the Rose Garden and finishing the tennis pavillon. None of this other stuff, not a word.

The truth is, the only way Melania elevated foster care is because her husband killed so many people with COVID-19 that a lot of kids were orphaned — but this is an interesting spin on that stat, I’ll say that much.

The fact that she touts “social emotional learning” is a drop dead scream. A key element of that is feeling empathy for others. Why not try it on Donald? If anybody needs that training, you’re married to it.

Let’s look on the bright side. At least Abe Lincoln is dead and can’t see his name dragged through the mud like this.