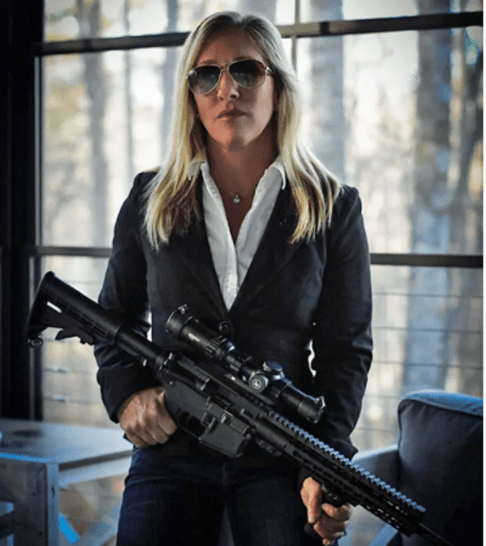 Well, well, it appears that being a sneaky, seditious witch is a bit more tricky than she thought. And now she’s desperately trying to dance between raindrops before her empty head gets soaked.

According to reporting in The Hill, Greene held a press gaggle today, and she was rather chatty. Regarding Traitor Tot’s recent dinner with virulent racist and anti Semite Nick Fuentes, Taylor Greene said that she agreed with House Minority Leader Kevin McCarthy (whom she is backing for House Speaker in return for free run of the House) that Fuentes’ views have no place in the Republican party.

Crap. Greene apparently had a brain fart, and that her Glorious Bleater had just had a dinner with Fuentes, rap loser Kanye West, and a GOP bomb thrower Milo Yiannopoulos the week before. She quickly recovered and tried to start covering her tracks;

“President Trump had no idea he [Fuentes] was even coming. So that’s unfortunate,” Greene said.

Realizing that this was too lame for belief, even for her dumb ass, she immediately started paddle footing with the reporters to absolve Hair Twittler of any blame;

She said that Trump’s team is making “big changes over who can come in and the vetting process, which I think is smart. Any former president should have that in place.”

Nice going, dumbass! She’s ignoring one simple fact. Trump is no longer a faux real estate magnate, at the mercy of his incompetent staff. Trump is a former President, and as such he has a fulltime Secret Service security detail, who obtain the name of every visitor, and thoroughly vet them. There is no way that His Lowness didn’t know exactly who was walking through the door that night.

But the slope for Laborious MTG just kept getting slipperier and steeper from there. Because earlier this year, she actually spoke at a conference of far-right racists hosted by the same scumbag she was now vilifying. And her tapdance was no better than the one she pulled to try to defend Trump. Ginger Rogers she ain’t

Greene said that before she spoke at the Fuentes event, her understanding was that it would be a group of 1,000 to 1,200 college students.

Greene went on to blame ignorance of Fuentes and his opinions. And once again, MTG tripped over her own shoelaces. Because Greene isn’t some frumpy housewife, as much as I wish she was, being invited to speak in front of a Kiwanis luncheon. Greene is a sitting congresswoman, with a full-time staff. And every request for her time is vetted by her staff. Like Trump, there is no way that she didn’t know who she was talking to.

And hey! Remember Milo Yiannopoulos I mentioned above, the GOP bomb thrower? Back in 2020 he actually called Trump A Traitor! And here’s where the penny drops. Earlier this year he was an unpaid intern for Laborious MTG in her office. News Flash for MTG. Get to know who your staff is;

An NBC News report on Tuesday said that Yiannopoulos, who said in 2020 that he felt “betrayed” by Trump and pledged “vengeance,” had “arranged the dinner ‘just to make Trump’s life miserable’ because news of the dinner would leak and Trump would mishandle it.”

I love this. Apparently Yiannopoulos is smarter than MTG, since he not only planned the stunt, but went into it knowing that Trump would fuck up the fallout! When pressed, Greene’s response was that she was Sorry to hear that, and hoped that it wasn’t true.

Here’s the sorry part. This woman can barely tie her own shoes, and yet she was just elected to the US congress in a landslide, and Kevin McCarthy wants to give her House committees, although if she plays her Queenmaker cards right, she’d like a committee Chair. And she’s a lying, duplicitous racist snake who doesn’t even have the courage of a Nick Fuentes to stand tall and take ownership of it. I have no pity for her constituents. You get what you deserve, suckers!