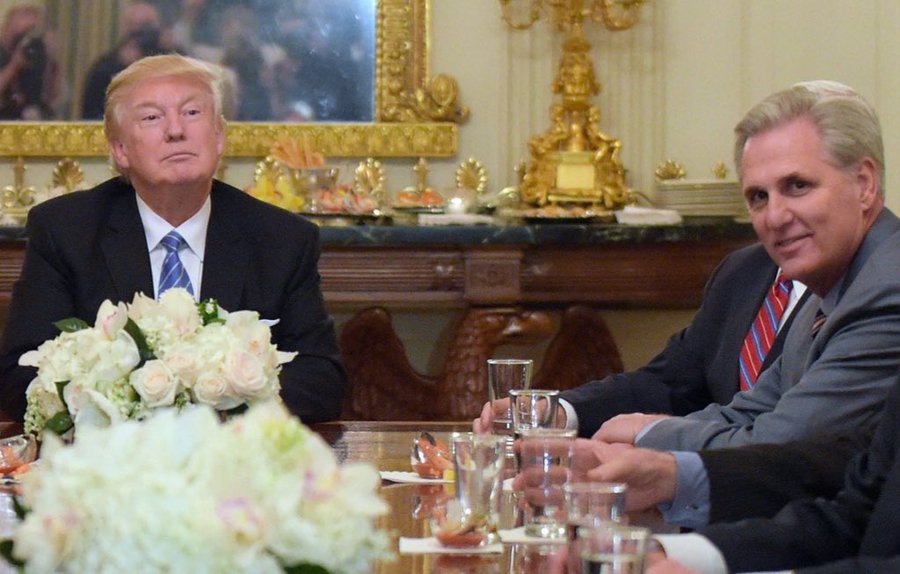 There are two basic types of people in politics, those who have ideas and principles that they actually believe in and want to legislate, and those with no ideas who don’t believe in anything, but love power. The pursuit of power and the retention of power for its own sake becomes the guiding light of their lives. It won’t surprise you to learn that Kevin McCarthy gave up any pretense to principles when Donald Trump came on the scene, and of course he just ratified that position when he made his recent pilgrimage to see Trump at Mar-a-Lago.

Now bear in mind that McCarthy has got loony tunes Marjorie Taylor Greene to deal with — whom Trump likes — and Liz Cheney is coming under fire after voting to impeach Trump — and McCarthy isn’t doing anything to help her. How can he? He’s got to embrace the new fact free, principle-less, conspiracy theory faction of the GOP, which as the days go by, is turning more and more into the mainstream. Conservatism, as that term was once understood, is now invisible, or you might catch a glimpse or two of him shivering and hiding behind a rock, as the waves of insanity cascade around him, but look hard, because he is an idea on the way out. And McCarthy is either helpless or too disinterested to do anything. Or, more likely, Trump told him exactly what to do and that’s what you’re going to see. The Bulwark:

So what did McCarthy get out of the meeting? Well, he’s in a spot of trouble back home in the swamp.

McCarthy’s conference is currently facing the ongoing trainwreck Marjorie Taylor Greene for . . . [gestures expansively] . . . all of this.

And simultaneously there is a mounting effort to dump Liz Cheney from her position as GOP conference chair, a move McCarthy claims to be trying to head off even as Trumpy members ignore his warnings.

On Wednesday the House GOP conference will meet and Cheney will have the chance to defend her vote to impeach Trump. Roughly 115 Republicans seem to want her out of leadership. What McCarthy will do at that meeting is a mystery. Like GOP Whip Steve Scalise, McCarthy said he supports Cheney in her leadership post. But Trump hates Cheney, so McCarthy is trying to walk that back, too. He now says that “questions need to be answered,” such as the “style in which things were delivered.”

Style is McCarthy’s consideration now, because it’s a verity that truth isn’t. And that is nothing new where he’s concerned. Not at all.

“Kevin never tells members the truth. He tells them what they want to hear,” said one GOP leadership aide. “If he wanted to call off Rep. Andy Biggs he could. If he wanted to deal with Marjorie Taylor-Greene he could. And they would listen to him.” As for Cheney, this aide said, McCarthy is clearly not asking members to stand down.

Former Rep. Eric Cantor—who co-wrote a book in 2010 with McCarthy and Paul Ryan, called Young Guns—seemed to be taking a direct shot at McCarthy last Friday when he published a piece in the Washington Post insisting that Republicans owe voters the truth.

“Political parties and their leaders have two options: Engage in the competition of ideas and solve problems while moving the country forward, or continue to promote disinformation and false narratives designed to undermine our democracy. The choice should be obvious,” Cantor wrote.

This is the essence of the matter, truth. Trump just got done telling The Big Lie about his stolen election and apparently he intends to keep telling it to anybody who will listen during his impeachment trial. That’s why the lawyers have all been bailing on him. But who has not left Trump’s side? McCarthy. Because the truth isn’t in him. He only knows how to manipulate lies for power’s sake, that’s who he is.

Former Rep. Bill Thomas, who McCarthy worked for as a staffer before winning his seat in Congress, issued a public rebuke of McCarthy after the attack on the Capitol, calling McCarthy out for voting to decertify the election. McCarthy’s mentor called him a “hypocrite” who nurtured the “phony lies” Trump perpetuated. “I look at it in terms of what you did, how you did it, and when you did it. What is more important ? Ending any kind of continuation of massive lies after the Capitol was torn apart—which [McCarthy] didn’t do…and then finally after months of supporting those outrageous lies of the president, he decides that actually Trump lost and Biden won.”

And it’s important to remember that McCarthy hasn’t just been giving aid and comfort to the liars. He was a proponent of the Big Lie. Days after the election, and one day before the networks called the election for Joe Biden, McCarthy went on Fox on November 6 to spread the Big Lie himself: “President Trump won this election, so everyone who’s listening, do not be quiet,” he said. “We cannot allow this to happen before our very eyes.”

So yes, Kevin McCarthy is a victim of the crazies in his caucus. But he’s also a perp. He did this.

You recall McCarthy’s now-legendary comment in 2016, “There are two people I’m sure are on Putin’s payroll, one is Rohrabacher and the other is Trump.” If you asked McCarthy about that today he’d probably say, “So what?” Because Putin’s puppet or not, Donald Trump is the leader of the Republican party. Nobody with even one eye open watching this is saying anything different.

Feel sorry for Kevin. He just wants to be Speaker, okay? He didn’t sign up for any of this, stolen election theories, crazy lawyers getting sued by voting machine companies, space lasers and wildfires — in his own state, no less — being in the middle between Liz Cheney and Trump, people doing ca ca on the floor of the Capitol. Geesh, give him a break would you? These are perilous times that call for leadership and if you think McCarthy has any of that to offer, oh man are you wasting your time.