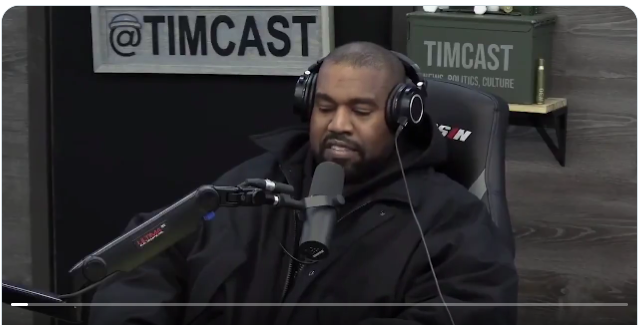 Another day, another psychotic episode for Kanye West, who has yet to file for the presidential race of 2024, although he has declared his intention to do so. West appeared on an alt-right platform, Censored.TV, hosted by the founder of the Proud Boys, Patrick McInnes, along with a giggling Nick Fuentes. West was asked, “So what are we going to do about these Jews? What do you say?”

His response was that Jews should be a servant class. “Jews should work for Christians. I’ll hire a Jewish person in a second if I knew they weren’t a spy and I could look through their phone and follow through their house and have a camera all in their living room.”

This man is deranged. And this is only part of it. Rolling Stone:

“Jewish people can’t tell me who I can love and who I can’t love,” he continues. “You can’t say, you can’t force your pain on everyone else. Jewish people, forgive Hitler today.” […]

Further into the interview, McInnes repeats an earlier claim that “ethnomasochism” is a “genetic white thing,” which Fuentes counters by saying “liberalism has poisoned the well for white people.” Fuentes takes the moment to nosedive into a thread about his childhood, claiming that “kids love Hitler” and that there is something compelling about the videos, propaganda, and symbols. When McInnes questions Fuentes’ claim, the Holocaust denier clarifies that he is referring to kids on 4chan.

This is some very sick $hit. Simply put, West believes that spewing this hate speech is “awesome for a presidential campaign.” That is how he characterized the backlash from his previous interview, the article says. Then he goes on to blame Jewish people for Adolf Hitler’s “reputation.”

and comparing abortion to “eugenics,” “genocide,” and the “Holocaust.” West also reiterates his claims that “Jewish people control the majority of the media, along with banks, along with real estate, along with malls.” He adds, “They can control the narrative. History is written by the winners.”

This is full fledged Nazism. There is no other word for it. My God. I literally have goose bumps as I sit here and type. I am horrified. West has 18 million followers on Instagram, most of them young people.