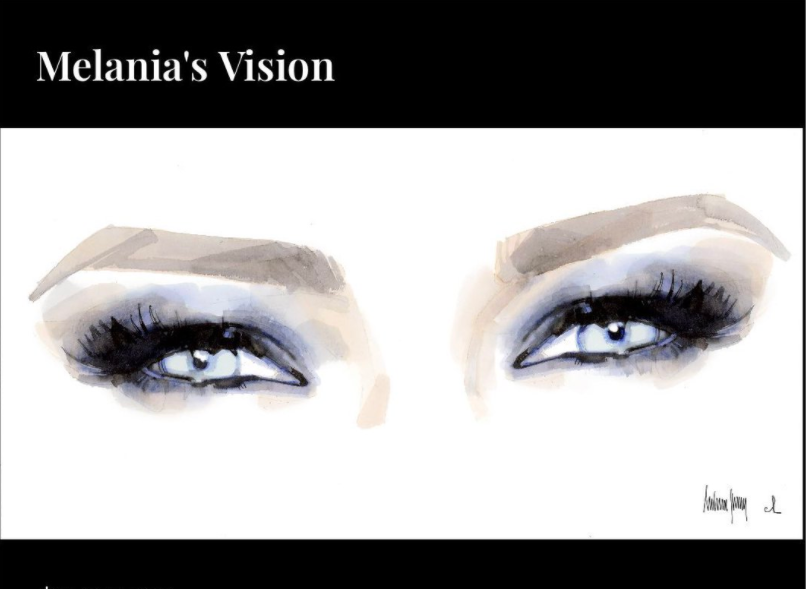 Seeing is believing, friends, but if your reaction to what you are about to read is the same as mine, you’ll be shaking your head and saying, “Whut?” even after you’ve seen it. Melania Trump is entering the world of NFT digital art, the letters standing for “non-fungible tokens.” The “art” in this case is the parts of Melania’s body, from what we can tell so far. You can make of that what you will. We’re reporting all that we know and will continue to do so.

This is the first submission in this line of unforgettable collectibles.

The eyes are the windows of the soul and hers are:

So you see the truth of the old adage. We love to see the wisdom of the ages proven right around here. It imbues us with a sense of stability, in a world which is going more barking mad by the hour.

I apologize that we don’t offer motion sickness bags, because when you read Melania’s ad copy for this travesty, you’re going to want to hurl. The Hill:

Melania Trump is entering the world of NFTs, selling “breathtaking watercolor art” featuring an image of her eyes to collectors.

The former first lady made the announcement on Thursday, saying the nonfungible tokens, or NFTs, will be released in regular intervals.

The first one, titled “Melania’s Vision,” includes the painting of Trump’s eyes by artist Marc-Antoine Coulon and an audio message.

“My vision is: look forward with inspiration, strength, and courage,” Trump says in the clip.

The sales site for the NFT, priced at $186 as of Thursday morning, says it will provide the collector “with strength and hope” and “an amulet to inspire.”

And you know the mantra by now, right? On the count of three now, one two IT GETS WORSE!! Melania is linking this bovine caa caa into her BeBest initiative, which only existed in a publicists’ dream.

A portion of the proceeds from the sale will be “donated to support children in the foster care community,” a statement said. A Trump spokesperson didn’t comment on how much of the money will go to charitable efforts. […]

“I am proud to announce my new NFT endeavor, which embodies my passion for the arts, and will support my ongoing commitment to children through my Be Best initiative,” Trump, who’s kept a relatively low profile since exiting Washington, said in a statement.

“Through this new technology-based platform, we will provide children computer science skills, including programming and software development, to thrive after they age out of the foster community,” she added.

You just send Melania your money and she’ll see that disadvantaged kids are educated. That’s so gracious of her, considering how Trump University is now defunct.

And it looks like things are going to get worse and worse.

In addition to the NFTs, Trump will be launching a “one-of-a-kind auction of historical importance” next month, a news release from her office said.

Parler, the controversial social media company, will power Trump’s NFT effort, according to her office.

Trump is the latest high-profile figure to get into the NFT market, which allows holders of digital art and collectibles to track ownership. Tampa Bay Buccaneers quarterback Tom Brady announced his NFT collection earlier this month. Michael Cohen, former President Trump‘s ex-personal attorney, recently said he would sell mementos from his time in prison as NFTs.

Parler and Melania. I cannot think of a pair of entities that I would trust more with charity and children, can you?