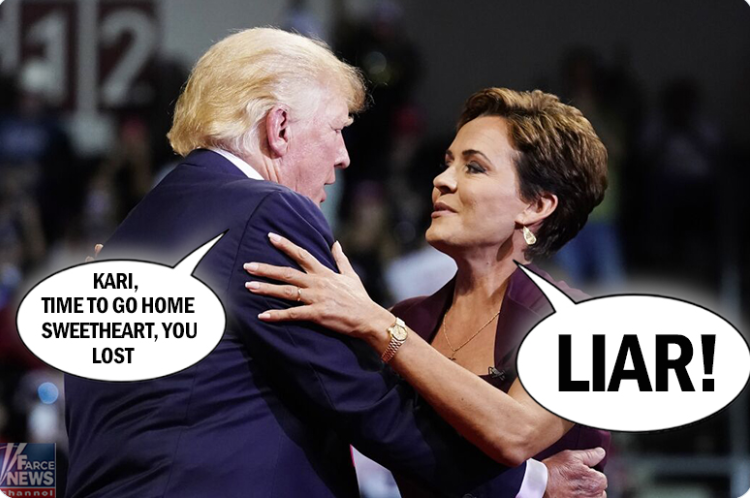 What is it in the Republican party these days? Some kind of a virus? Nobody can take “you lost” for an answer? I’m actually starting to admire Herschel Walker. He didn’t concede the election, but at least he did get up that night and thank all of his supporters for the great job they did, and that was most of a concession speech.

I honestly thought Walker might pull a Kari Lake. They were photographed together and they were part of this Brave New Trump World that never materialized, except in their imaginations.

But their imaginations are strong and Lake in particular is given to delusion. My question, is she breaking the law by asserting to the world that she is in fact the governor of Arizona?

Kari Lake is now calling herself, “the real governor, the duly-elected governor” of Arizona. pic.twitter.com/sdS6z3T5AA

This is good for laughs, in a sense, but is what she’s doing legal? It is illegal, for instance, to impersonate a police officer. I am thinking that it must be equally illegal to announce publicly that one is the governor of a state, when one is not.

I think it would be a good idea for the attorney general of Arizona to look into this. I’m serious. We have come to a sad place in this country when a defeated candidate can go on right-wing media outlets proclaiming that she is the holder of a big office, when she is no such thing.

I am wondering if Lake isn’t the next person to go under the Trump bus? Think about it. This stolen election fable is wearing thin.