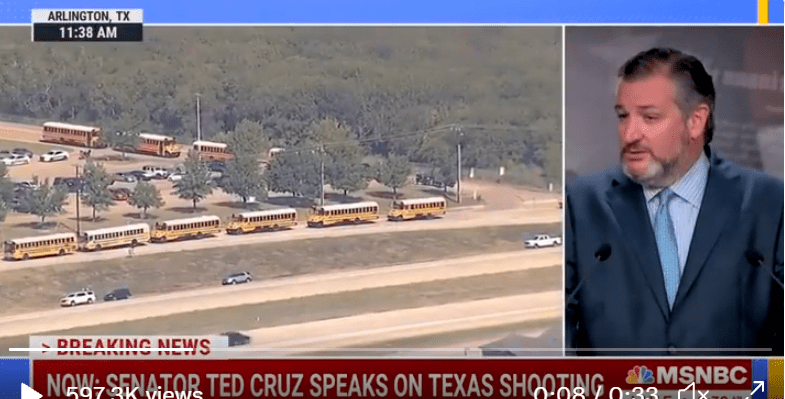 Dear sweet Jesus! I didn’t plan on writing this, and I would rather do anything else but write this. When I walked in the door about a half an hour ago with Teri from the store, I was planning on writing a nice, sarcastic political piece about Pennsylvania GOP hypocrisy. But I can’t. And I don’t know if I’ll be able to later, either.

Because we turned on the television to MSNBC to find that 18 precious babies and 3 adults had been senselessly slaughtered when a local 18 year old mental retread walked into an elementary school in a small Texas town of 15,000 residents, and turned it into his personal shooting gallery. And now, the town is 21 light in the population report, with more damage possible.

I beg you, how many more?! How many more innocent children have to be robbed of 60-70 years of life, their mothers and fathers, their brothers and sisters, birthdays, soccer games, boyfriends, girlfriends, lovers, spouses, children, grandchildren, anniversaries? Leaving behind parents who now have a hole knocked through their hearts that will never completely heal over. And all because the GOP is a wholly owned subsidiary of the Merchants of Death of the NRA and US armaments industry.

I don’t even have to wait to see the fat, pompous faces of Texas authorities like Governor Greg Abbott, and Senators John Cornyn and Ted Cruz. I can recite that lame shit in my sleep. Thoughts and prayers for the families and victims. And because they already know how lame and insincere that sounds, they always follow up with an admonition designed to take them off of the hook, At this time, it would be cruel to politicize such a tragedy by talking about gun control. That sound about right? Well, guess what guys? Fuck You! And fuck your thoughts and prayers! You own this!

See, there’s a political disconnect here that is unique to the Republican party. The Democrats are the Big Tent Party, welcoming the minorities and the down on their luck, looking for equality. The GOP is the Party of Big Business, made up of mostly better off, ofay assholes who have no idea of what real life is like. And don’t take my word for it, you can see it in their actions and words.

Just look at soulless ghouls like Laborious MTG and Lauren Boebert, and some air blown Barbie in Nevada running for office this year, gleefully marching around in their campaign videos toting AR-15’s, happily spouting off empty rhetoric about 2nd Amendment Rights, and ending the ad to the sound of gunfire and ricochets. What the fuck do they know about it? They’re pampered brats.

By far and away, the ringleader of this cabal of death is Cancun Teddy Cruz. A few years ago, running for reelection, he put out a sick, perverted video online ad called, believe it or not, Making homemade AR-15 bacon. I shit you not. You can find it on youtube. In the video, Cruz wraps 2 pieces of bacon around the barrel of an AR-15, loads it up, aims down the range and starts peeling off rounds. After like the 3rd cartridge, he reaches around, peels the bacon off of the barrel, takes a big chomp, and gloats MMmmm. Nothing like homemade AR-15 bacon!

That’s the disconnect right there! They are all well off, rich, pampered assholes who grew up in safe neighborhoods, never served in the military, and have never seen what an AR-15 can actually do. They didn’t grow up in Mogadishu, Somalia like representative Ilhan Omar did, where bodies in the street were a fact of life, and gunfire was as familiar as traffic noise. They didn’t grow up in the rough section of Newark, like Senator Cory Booker did, where gunfire in the middle of the night meant roll out of bed onto the floor, and you ran to the door to see bodies leaking in the streets while residents screamed and cried. This is all just an existential joke for the pampered GOP caucus.

So I have a solution. Granted it’s radical, but it might just have a chance for the simple reason that it doesn’t upset the delicate sensitivities of the NRA owned GOP caucus, not the actual NRA itself. It doesn’t outlaw semi-automatic weapons of war from the streets. And it doesn’t restrict or regulate maximum capacity clips any more than federal law already does. Instead, it makes mass murder personal.

Enough is enough. It’s far past time to get these pompous, self indulgent, insulated GOPtards out of their comfort zone, and make them finally come face-to-face with the real world results of their bromance with the Merchants of Death. Let them see firsthand the damage those high velocity rounds do when they hit flesh. Let them look into the haunted, ravaged eyes of parents about to face the most inconceivable chore imaginable, burying their child. And then let’s see how beholden to the NRA they are. At least it’s a start.