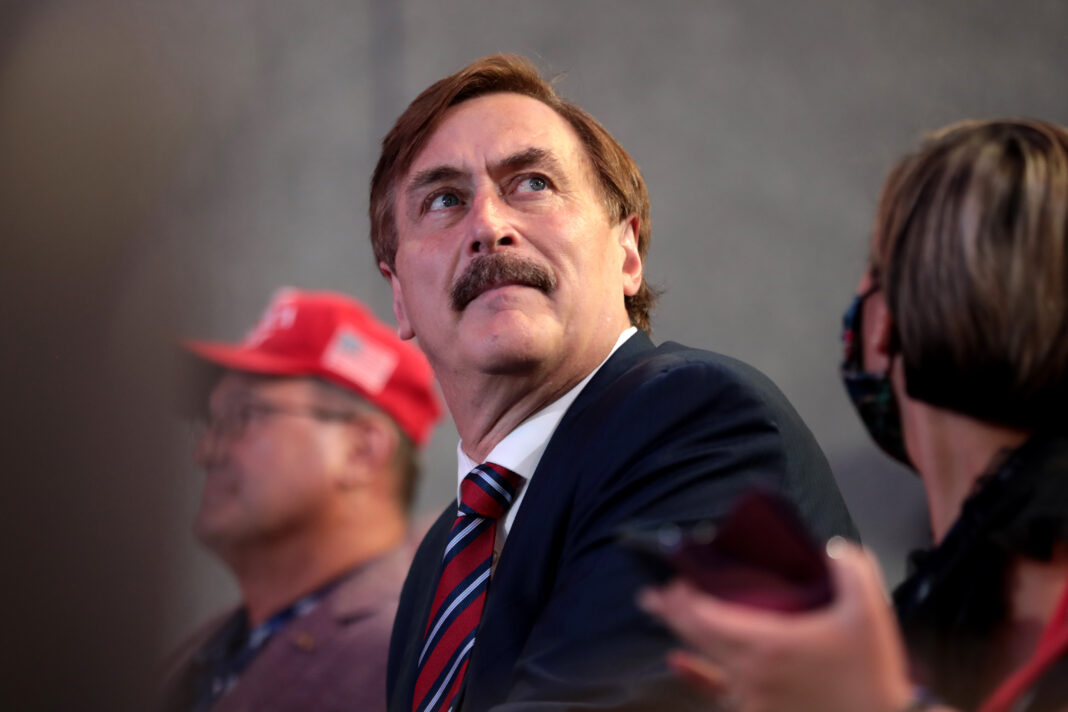 I wonder if Mike Lindell ever heard of the Greek myth of Icarus and Daedalus? Daedalus warned his son, Icarus, not to fly too close to the sun or his wings would melt. Icarus thought he knew better, did exactly what he was warned not to do and went crashing to his death. The parable has since become a metaphor for excessive pride and hubris.

Mike Lindell has those character defects in spades. He also isn’t the brightest of men. He is a true believer of the Big Lie, whereas a lot of his compatriots are going along because it’s a good scam and as long as the grift holds up, all will be well. Even Donald Trump doesn’t really believe that he won the election, but he’s banking on the fact that he can keep the donations rolling in.

Last night in Mankako, Minnesota, Mike Lindell, on his way through the Hardee’s drive-thru found himself “surrounded by” the FBI and a search warrant was executed on him. It is virtually the opening of Pandora’s box. Here’s a good overview from Nicolle Wallace.

Tina Peters, a once-sane elected official was radicalized by Lindell. The New Yorker has a terrific piece up describing how Peters used to give lectures on how safe the Colorado voting system was. The magazine says she gave a presentation “called ‘The Life of a Ballot,’ in which she and her staff explained how Colorado’s vote-by-mail system worked; how the verification of signatures and the rejection of double voting were done; how the county’s scanners and tabulators, which were designed by Dominion Voting Systems, tallied the ballots; and how the Dominion system was air-gapped, with no Internet connectivity, so that the voting tally couldn’t be hacked.” Talk about a 180 degree flip from information to disinformation and conspiracy theory. Wow.

Tina Peters is a key player in the DOJ investigation. That is important because she’s one of many people who were, or who plan to be, in charge of elections in various states, as you saw from the MSNBC video.  New York Times:

Mr. Lindell, both in interviews and on his online television show, said that the agents who took his phone had asked about his ties to Tina Peters, the clerk of Mesa County, Colo., who is facing a state indictment over an effort to obtain data from voting machines produced by Dominion Voting Systems. The Dominion machines were central to conspiracy theories about the 2020 election, and Ms. Peters is accused of engineering a scheme that she believed would prove the devices had been used to steal the race from former President Donald J. Trump.

By seizing Mr. Lindell’s phone, federal investigators brought into the case one of the most prominent purveyors of pro-Trump disinformation about elections. The warrant used against him went even further, placing him on a list of what it described as several “co-conspirators.”

Those people, according to a copy of the warrant, included not only Ms. Peters but also Douglas Frank, an influential activist who claims to have mathematical proof that the 2020 election was stolen, and Sherronna Bishop, a former campaign manager for Representative Lauren Boebert, Republican of Colorado. […]

While the full scope of the inquiry remained unclear, the F.B.I. was investigating at least three federal crimes, the warrant said: identity theft, intentional damage to a protected computer and a conspiracy charge. The warrant added that prosecutors were seeking records and information about “damage to any Dominion computerized voting system” as well as other attempts to alter or manipulate the voting machines or their software.

This is the turning point in Lindell’s career. He has played Don Quixote so far, tilting at his Big Lie windmill and it’s all been a farce. He’s got enough money to pay people to go along with him. But the fact that federal laws have been broken and that Dominion has a case which has been characterized as solid and compelling, by people familiar with that area of law, is no small thing. Lindell is about to face the music.

Among the questions the F.B.I. asked Mr. Lindell, he told The Times, was whether he had paid Ms. Peters to show up at his gathering. The agents “asked if I gave her any money after the symposium,” he said.

Mr. Lindell once told a local reporter that he had funded Ms. Peters’s legal efforts directly. He now says that he was mistaken about his contributions and that he did not directly contribute to her defense. “I was financing everything back then,” he said, referring to the various lawsuits filed in relation to the 2020 election. “I thought I’d financed hers, too.”

Mr. Lindell earlier told The Times that he had funneled as much as $200,000 to her legal defense through his legal fund, the Lindell Legal Offense Fund. Ms. Peters had directed supporters to donate to that fund.

On his web TV show — which is streamed on Facebook and several other platforms — Mr. Lindell claimed that the F.B.I. agents had also asked about Mr. Frank. They wanted to know specifically, he said, whether he had ever employed Mr. Frank. Mr. Lindell said that Mr. Frank didn’t work for him that “but I’ve helped him out a couple of times,” according to the MyPillow executive’s account.

I mentioned the New Yorker article (and linked to it above.) You owe it to yourself to read that because it shows how utterly bat guano politics in Colorado got. The article describes how Tina Peters hated the election of Governor Jared Polis. He was in favor of sex education, she was not. Peters also was friends with Lauren Boebert’s campaign manager, Sheronna Bishop. It was Bishop who met up with Douglas Frank, the “cyber guy” that is the mainstay of Mike Lindell’s conspiracy theory about how the 2020 election was stolen. Bishop introduced Frank to Tina Peters and here’s what that looked like.

That week, Peters met with Frank at her office. Bishop was present, as were members of the election staff. “Something very important happened at that point,” Frank told me. “I showed her a lot of this stuff, and she still wasn’t convinced. And then I said, ‘Well, there are two thousand dead people who voted in your election.’ And she says, ‘Well, that can’t be because we use signature verification.’ ”

According to Frank, Peters then asked a person in charge of training staff members on signature verification to come in and explain how the process works. Frank recalled, “The trainer said that, when people start to reject too many signatures, they take them off duty,” which would, in his theory, allow fraudulent votes to go undetected.

(There is no evidence that signature verification, which is not handled by Dominion’s systems, allowed thousands of dead people to vote in Mesa County, and a spokesperson for the secretary of state’s office explained that a bipartisan process is designed to prevent that from happening.)

Frank went on, “You can see Tina Peters’s mouth fall open, and she excused everybody from the room. And then it was just me and her looking eyeball to eyeball. And she said, ‘O.K., I see we have some problems here. What are we going to do next?’ Well, we put together a plan.”

The plan that Frank devised with Tina Peters and Sherronna Bishop centered on a planned software update—called a “trusted build”—of the county’s Dominion Voting Systems machines. Because election equipment is not meant to be connected to the Internet, which could open it up to hackers, Dominion’s software upgrades are conducted in person, with only limited personnel in attendance.

Frank said he told Peters that it was imperative to make a copy of the existing system before the machines were reprogrammed. “ ‘Otherwise, you’ll lose your evidence,’ ” Frank recalled telling her. “So that’s when I put her in contact with some people who could come in and do backups.”

One of the people Frank said he contacted was Mike Lindell, the MyPillow C.E.O., who has boasted about spending at least thirty-five million dollars to try to prove that the 2020 election was stolen.

“Mike hired me to be a consultant in some of his lawsuits against Dominion Voting Systems,” Frank said. (Lindell disputed this characterization.) Frank also claimed that Lindell introduced him to Trump’s legal team on a video call. “It’s all the attorneys,” Frank said. “Sidney Powell and Rudy Giuliani and all those people—about sixteen of them. And they screened my work.” (Powell and Giuliani could not be reached for comments. Lindell denied personally introducing Frank to Trump’s legal team, though he added it was possible that one of his attorneys did.)

Frank told me that he “passed along the information” about Tina Peters “to the Lindell team and said, ‘Look, she has these systems that need backup, and let’s send somebody to her who can do this, and do it properly.’ ” (Lindell said, “I had nothing to do with what Frank did with Peters and Bishop” at the time.)

That was the beginning of this Big Lie madness that Lindell has become the chief architect of. Robert Graham, a cybersecurity professional who was at Lindell’s cyber symposium, described the scene in Sioux Falls as “all weird nonsense.” “They’re trying to argue this thing that their listeners or the Republican masses want to believe,” he said, “and so they keep structuring the reality to fit that conspiracy theory.”

It is the end of the beginning of Mike Lindell’s looney tunes ride and the beginning of the end for him. Meanwhile, he went on Telegram today imploring his disciples to “fight” by buying more pillows.

Lindell just doesn’t get it. He is totally up the creek and all the pillows in the world aren’t going to help him — unless the authorities let him pad his prison cell with them. I suppose that’s one use.