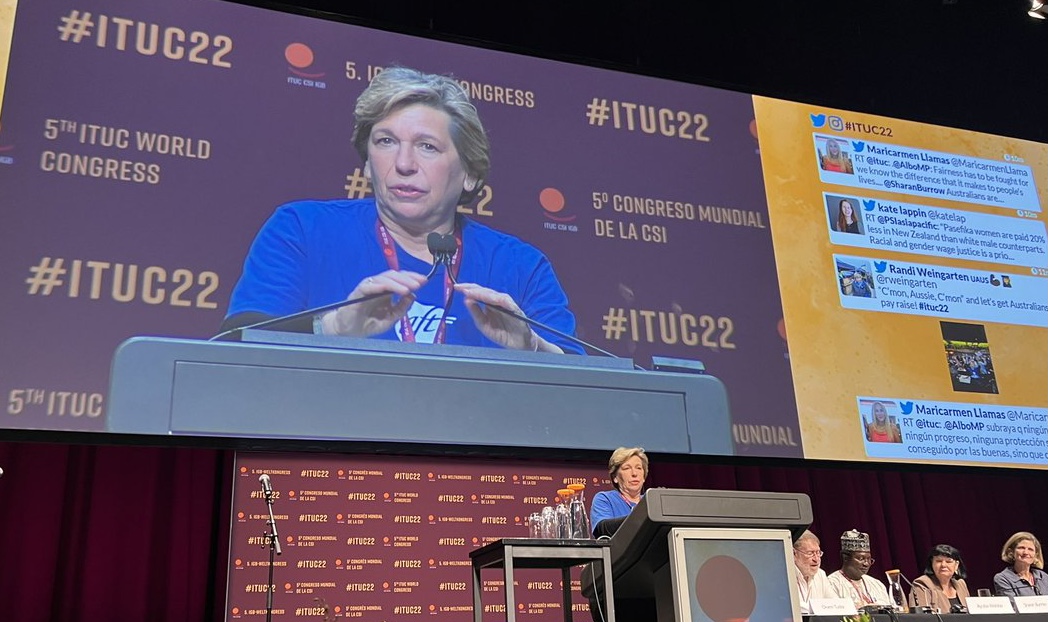 Former drumpf Secretary of State Mike Pompeo, who himself looks like a gone-to-seed Chicago gangster with a blind barber, and who has dealt with some of the real most dangerous people in the world including Taliban leaders, North Korea’s Kim Jong-Un, Vladimir Putin, and, of course the bloated pumpkin himself, sought to place some daylight between himself and the other also runs for the GOP Presidential Nomination last week by attacking the head of The American Federation of Teachers’ Randi Weingarten, calling her “the most dangerous person in the world”.

Really, Mike? Does education really scare you and your former boss’ mouth breathing base that much?

“Randi Weingarten, the head of the American Federation of Teachers (AFT), said in an interview that former Secretary of State Mike Pompeo is “desperate to be labeled as the extremist” in the upcoming 2024 Republican presidential primary race.

In an interview with Semafor, Weingarten, who has been the AFT’s president since 2008, said that Pompeo’s latest attacks toward her are an attempt for him to gain millions of dollars in funding for a potential presidential campaign.

“He needs to fund his campaign,” Weingarten told the media outlet. “He doesn’t have a base so he is trying to get millions from the anti-union, anti-public-education billionaires like Betsy DeVos.”

Weingarten also said that Pompeo, who is thought to be eyeing a potential 2024 White House bid, is trying to use the same “extremist” platform GOP candidates used in the previous election cycles, noting that he wants to form his campaign on “hate and division.”

That is all too unfortunately true, Randi, but hate and division is really all the Republicans have left in their bag, every major policy decision they have rolled out in the last 40 years have only led to a degradation of American culture, enabled disease, or accumulated mountains of debt.

So they choose to scapegoat teachers, doctors and popular entertainment for inability to anything other than offer more of the same.

I know that Mike Pompeo is running for president, and frankly I don’t know whether to characterize his characterization of me in the @daveweigel interview as ridiculous or dangerous. https://t.co/5QBx2lE0K4

In the broader sense it is of course ridiculous, Randi, but narrowed to what such a charge made by a public figure means to individual teachers it is very dangerous indeed. Teachers are already under attack from the right and by putting them in his crosshairs Pompeo only compounds that danger.

Randi also had this to say in reply:

So Mike, let me make it easy for you. We fight for freedom, democracy, and an economy that works for all. We fight for what kids & communities need. Strong public schools that are safe and welcoming, where kids learn how to think & work with others. That’s the American Dream!

Saying teacher’s unions are more dangerous than Kim Jong-un is one of the most asinine things I’ve ever heard. Mike Pompeo is reckless for this. Teachers already face enough as is. Rational people may shrug this off but extremists hear it loud and clear.

Pompeo seems unlikely to prevail in the 2024 contest for the Republican nomination, but he has already planted his flag on the ground he wishes to defend against all comers – the most extreme and unhinged of the candidates.

Perhaps his ultimate goal is to demonstrate for the Judge brokers at the Federalist Society his qualifications for a SCOTUS seat and so a lifelong paycheck.