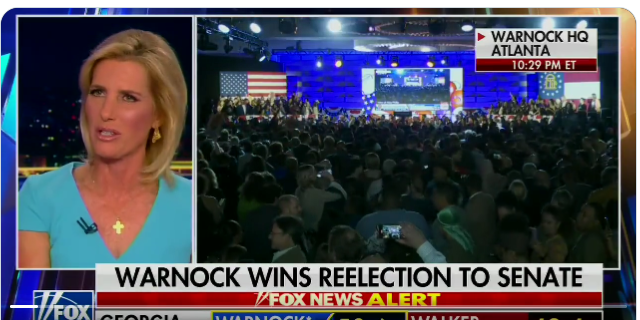 The blow back in the MAGAverse and the rest of conservative land is swift. Fox News is not happy that Herschel Walker went down in flames tonight. It’s a virtual certainty that the RNC is going to be chaired by somebody else besides Ronna McDaniel.

A sacrificial lamb must be found and McDaniel is it.

And it may not stop with McDaniel. To hear Laura Ingraham, she wants a real housecleaning. Great. The image that coms to mind is Three Blind Mice and she’s the farmer’s wife. See how they run.

If only there was someone to blame for these Republican losses — a deeply unpopular, corrupt former President mired in criminal investigations that dines with Nazis, perhaps https://t.co/VEXMhnHexj

And then Christian Walker chimed in. OMG. I hope this story gets a lot of press.

Republicans, we say we don’t play “identity politics” and then you ran this man mainly because he was the same skin color as his opponent with no background other than football. A boring old Republican could have won.

“A boring old Republican could have won.” Very probably so. This is as bad a defeat as when Roy Moore went down in flames in Alabama. The word at that time was that the GOPers could have picked a better candidate blindfolded out of the phone book. Moore was Steve Bannon’s choice.

This is what Geoff Duncan was complaining about and he was right, too. Walker is a terrible candidate. All of Trump’s candidates are terrible, that’s why they lose. J.D. Vance managed to squeak through but not the others.

So all roads lead back to Trump.

But on the other hand, the GOP listens to Trump, so they deserve what they get.

Here’s Kellyanne talking about mail-in ballots being a necessity. Duh…who oh who in the GOP screams in caps on Truth Social that YOU CAN NEVER HAVE FREE & FAIR ELECTIONS WITH MAIL-IN BALLOTS. I know one guy. 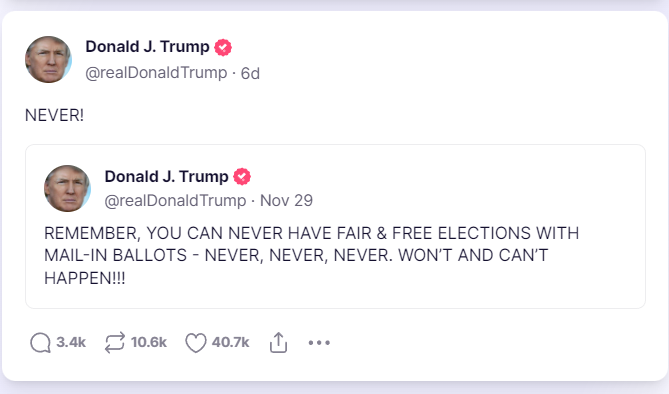 Maybe Kellyanne is cutting bait with Trump. Wouldn’t that be interesting?

And again, the one person who is to blame for all of this is over on Truth Social screaming in all caps about witch hunts.

Trump is being phased out. The GOP can’t stand to lose anymore. We are in the end times, folks.