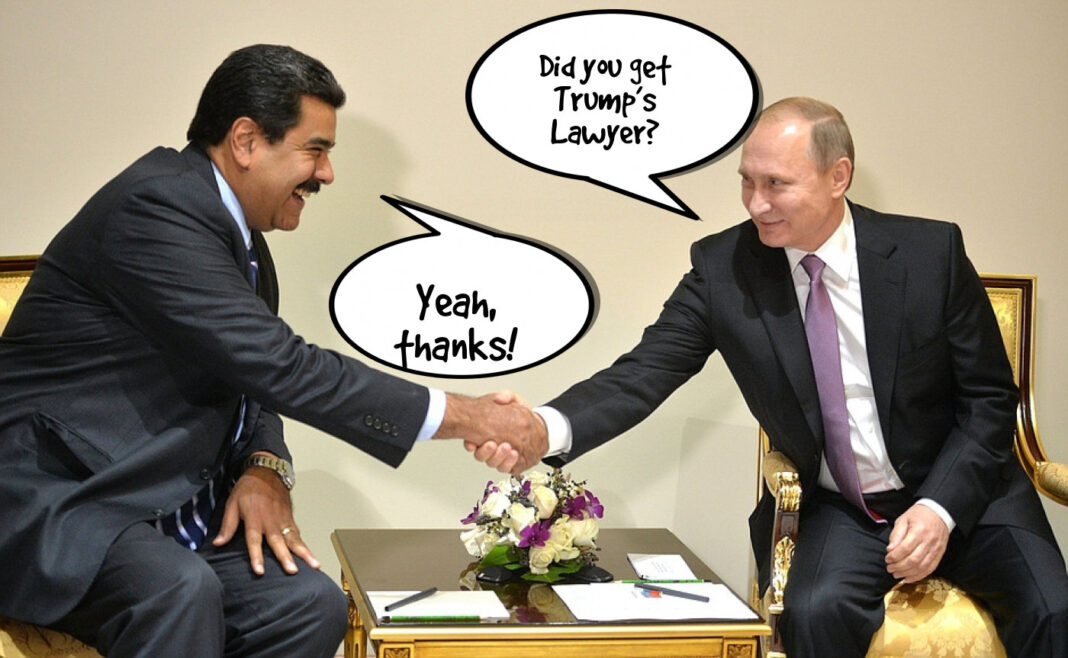 It turns out that even for high profile corporate lawyer like former Florida Solicitor General Chris Kise, who demanded, and got, a $3,000,000 retainer from Trump to represent him in the pilfered documents case, taking a side job to represent a client like Venezuelan strong man Nicolás Maduro against your own government can have repercussions.

Well, Kise was a registered agent for the Maduro regime, so that oughta speed things along. https://t.co/O8gIBSEjMi pic.twitter.com/dKJhSbIXZq

Leave it to that FBI lovebird and constant thorn in drumpf’s fat ass, Peter Strzok, to ferret out inconvenient national security conflicts on the star of der Gropinfuhrer’s legal whizz team.

A member of Trump's legal team (Kise) is or was employed to advise and represent the Attorney General of Venezuala (Reinaldo Predroza) whom the US regards as part of an illegitimate authoritarian regime. So, Kise should not be given access to top secret info.

No, he should absolutely not.

And note DOJ's 11th motion for a stay referred to counsel who might be witnesses, plural, which is consistent with Corcoran being FPOTUS Counsel 1 and Bobb being listed as Person 2, not FPOTUS Counsel 2.

So Trusty's likely in the thick of this too.

Jeeze, drumpf might have to go hat in hand to Rudy…
🤣🤣🤣

“Anybody working for Trump seems like a security risk.” pic.twitter.com/rmuBRcYpPr

You’d think, yet somehow I believe Cannon’s crazy ruling said they could (and that she can override the SM report’s “suggestions” anyway). So I’m not confident they won’t give Kise clearance anyway- nothing going by the book

Don’t be a buzzkill, Juliet. We want Rudy!

And also newly attached to the DeSantis team? No pressure on Cannon there?

Guy loves him some thugs.

He was hired to oppose US sanctions per this news article. No paywall https://t.co/MaQZAQ5eQq

Clearly could use you still at the FBI. What a waste and a loss for the country

Is it crazy to think that possibly, just possibly… that Trump Kise DeSantis Gaetz Abbott Cruz Maduro, using Venezuelan refugees, are all part of a Problem-Reaction-Solution sort of plot?

Not enough yarn and thumbtacks in the world, Awen.

It's [fake] surprising how many of the America First crowd are also agents of foreign dictatorships…https://t.co/nqXI8maFsx

Or admirers of them.

The migrants seeking asylum and dropped in Martha's Vineyard are from Venezuela.
Kise is a registerer agent for Venezuela and newly employed by TFG.
What could go wrong here? pic.twitter.com/Xr7S4nkONc

Holy fuck. But where is the Russia connection? Has to be there somewhere.

I’ll refer you to my top pic.

Good thing you’re undertaking this very basic due diligence because team trump surely isn’t. They’re lucky if any licensed attorney in this country picks up the phone

3 million dollar retainer will make them pick up every time.

Trump always thought he was a strongman pic.twitter.com/l1GUvu1VzL

So, it could be drumpf has to go shopping for attorneys again.

Such a bother, he still has Judges he must pick up yet.