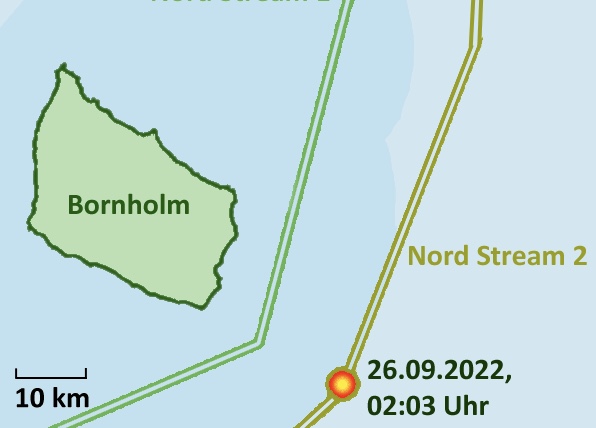 I Am seeing conflicting reports, but both Yahoo News and VOA Europe are reporting that the methane leaks caused by the explosions of unknown origin last week to Nord Stream pipelines 1 and 2 have now stopped and pressure in the lines is stabilized.

“Authorities in Denmark said Sunday that the Nord Stream 1 pipelines had stopped leaking natural gas into the Baltic Sea, a day after officials said the ruptured Nord Stream 2 pipelines also appeared to have stop leaking.

The Nord Stream AG company informed the Danish Energy Agency that a stable pressure now appears to have been achieved on the Nord Stream 1 pipelines.

Undersea blasts that damaged the Nord Stream 1 and 2 pipelines this week have led to huge methane leaks. Nordic investigators said the blasts have involved several hundred pounds of explosives.

A total of four leaks were discovered last week on the pipelines in the Baltic Sea near Denmark and Sweden.“

The agency said on Twitter on Saturday that it had been informed by the company operating the Nord Stream 2 pipeline that pressure appears to have stabilized in the pipeline, which runs from Russia to Germany.

“This indicates that the leaking of gas in this pipeline has ceased,” the Danish Energy Agency said.“

If true, these reports are great news, but perhaps tempered by the knowledge that huge amounts of climate damaging methane gas has already been released and we do not know at this time how much damage has been done.

“The U.S.-Russia clashes continued later at an emergency meeting of the U.N. Security Council in New York called by Russia on the pipelines attacks and as Norwegian researchers published a map projecting that a huge plume of methane from the damaged pipelines will travel over large swaths of the Nordic region.

Speaking Friday in Moscow, Putin claimed that “Anglo-Saxons” in the West have turned from imposing sanctions on Russia to “terror attacks,” sabotaging the pipelines in what he described as an attempt to “destroy the European energy infrastructure.”

“It was a deliberate act of sabotage. And now the Russians are pumping out disinformation and lies. We will work with our allies to get to the bottom (of) precisely what happened,” Biden promised. “Just don’t listen to what Putin’s saying. What he’s saying we know is not true.”

But an investigation could not begin until the leak stopped, which it appears now has thankfully happened.

Marjorie Taylor Greene and Tucker Carlson have both accused The United States of sabotaging the lines, perhaps they will volunteer to don wet suits and look for evidence to substantiate their claims.