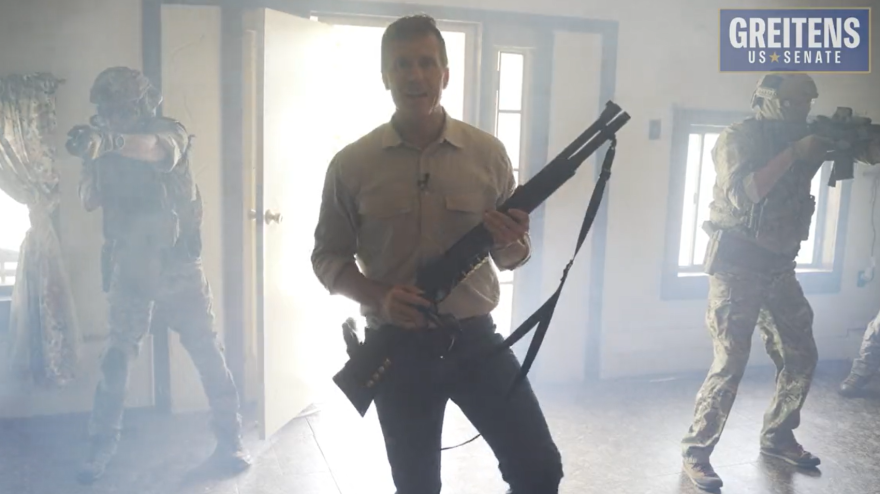 Eric Greitens’ recently released campaign ad, depicting the heroically disgraced ex-Missouri Governor staging a dramatic recreation of hisself leading a group (possibly LARPers, or perhaps off duty U.S. soldiers – someone needs to get to the bottom of that) of Posse Comitatus Act-violating raiders of a Republican-In-Name-Only’s modest ranch house in some unspecified Missouri suburb, has engendered death threats against his estranged wife and unfortunate children.

Greitens (whom I personally would not allow to gerbil-sit) is currently engaged in a pre-trial child custody hearing convened to determine whether his children will live with their mother, who is a college professor in Texas, or with the obviously disturbed alleged rapist Senatorial candidate in Missouri.

In the course of yesterday’s hearing in Columbia, Mo. it was revealed that the Great White RINO Hunter has now become, along with his terrified family, the hunted.

“COLUMBIA, Mo. (AP) — The family of Missouri U.S. Senate candidate Eric Greitens has been subjected to “serious threats” in the days since he released a violent campaign video in which he declares he’s “hunting” RINOs, or Republicans in Name Only, the lawyer for his ex-wife said in court Thursday.

Attorney Helen Wade said Sheena Greitens has received written threats, noting her email address is a public record because she’s an employee at a public university.

She’s scared,” Wade added during a hearing in the former couple’s child custody case. She said the video “has created a situation where others may perceive it as a call to arms.”…

Yeah, I can see how it might be interpreted that way.

…”Wade said the threats should be taken seriously and referred in court to written threats the family had received. She did not specify how the threats came, whether by email, social media or other means.

“We live in a country where this kind of rhetoric has resulted in violence,” she (Wade) said. “It’s in writing, – `Wouldn’t it be awful if someone hunted down and killed Eric Greitens and his entire family. Golly that would be terrible.′ – That’s one of them. The other one is so horrible I can’t read it aloud in court.”

And the crazy doesn’t end there…

“Greitens, who resigned as Missouri governor in June 2018 after an extramarital affair spawned a criminal charge in St. Louis, has repeatedly called the abuse allegations lies. He accused Sheena Greitens of collaborating with people he considers RINOs — Republicans in Name Only — such as Senate Minority Leader Mitch McConnell and longtime GOP operative Karl Rove, in an effort to sabotage his Senate campaign.”

Uh, Eric, I don’t think the wife needs Mitch McConnell and Carl Rove’s(???)help to sabotage your Senate Campaign, you seem to be doing great on your own…

But this is the Missouri Republican Primary we’re talking about, so maybe endangering your wife and children to create more macho cred with your base will not be seen as a disqualification, perhaps even as a plus.

But unless the custody judge is a full-on raving Trump appointed MAGA lunatic, I think you can plan on visiting your kids in Texas.

Or not. Which would be much better.