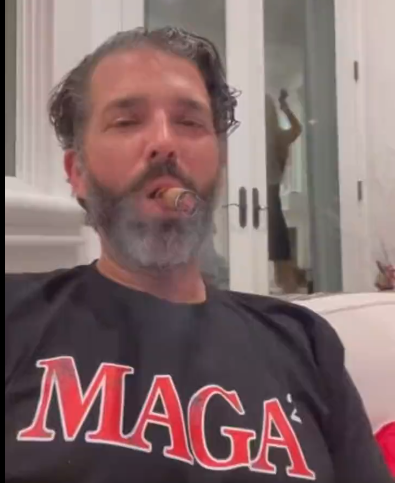 People in the Twitter thread you’re about to see are making book on when Don Junior ODs. Right now the long odds are the end of 2023.

As you have read here and elsewhere, Junior denies any chemical assistance and explains that his, shall we say, unique look and demeanor are the result of being an “animated guy.”

The Energizer Bunny is animated too, Junior, but he doesn’t look degenerate. You do. I have no idea who took this video but my best instinct is that there is going to be some holy hell to pay when this clip goes viral, as I believe it will. It’s at a quarter of a million views now. Or, maybe not. Maybe it’s old hat.

Don Jr: “I have no idea what the hell’s happening.” pic.twitter.com/inJbNDS6wS

I think the dark figure on the other side of the glass door is Kimberly, and it looks like the kids are gyrating along with her. Must be terrific, “Hey, we get to go to Dad’s and watch him get loaded and pass out, while Kimberly shows us the exotic moves that got her sued for $4 million bucks for sexual harassment.”

Although, to be honest, this is a much more wholesome environment for children to be in than down the beach at Grandpa’s, where there is screaming at delusional rappers, who dare to also declare their candidacy for the highest office in the land, punctuated by sidebar consultation with renowned right-wing subversives. Whatever’s going on at Junior and Kim’s house, it doesn’t look like terrorism and most likely Ivanka and Jared aren’t going to leak this to the FBI. Everything in life is relative, right?

Don Jr. Forgot to edit out his coke lines. What a train wreck that incompetent, impotent mess is!! Kimberly looks good for once tho! pic.twitter.com/KTeNRFTedA 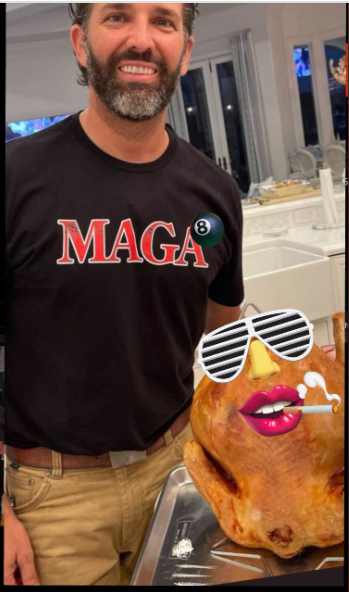 I don’t know if it’s photoshopped. I have no idea. I share with you the fruits of my daily trawl through the internet and right now Twitter is becoming a very strange place to be.

I wonder who is holding the camera/cell phone. Maybe Vanessa’s lawyer?

F. Scott Fitzgerald observed, “The very rich are different from you and me.” The yous and mes, who hold jobs, or otherwise have some credibility/responsibility in the world, cannot afford to be seen in this condition. This is insulated bubble world behavior. This is what life in an adamantine echo chamber looks like. Junior is the poster child for irresponsibility and lack of self control. I wonder if he will ever join us here in the real world? I think not.