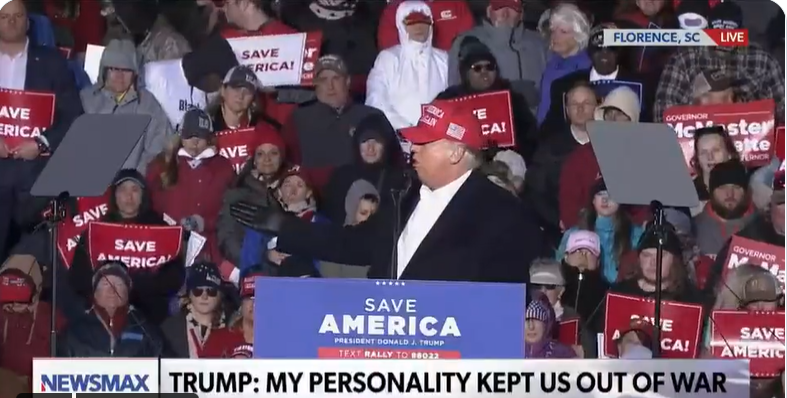 I’ve been kicking this around in my head for awhile now, but it just clicked together. You all know my definition of a politician, Someone who licks a finger, holds it up to see which way the wind is blowing, and then runs to the front to show he’s leading the way. It’s funny because it’s true. Most politicians don’t take a shit without checking the polling. And they’re not deep thinkers, cuz too many voters might think their idea sucks.

With that in mind, let’s go back to 2015. Traitor Tot farted and clanked his way down that schlock gilt escalator to a paid cheering throng, called Mexicans rapists and drug dealers, and announced he was running for President. Traditional conservatives, along with the rest of the primary field were horrified. But in fact, a whole new Trump base sprang up from nowhere, and he was off and running. Trump took personal credit for activating a whole new GOP base. As with everything Trump, in one context it was true, but in another context it was bullshit.

Here’s the McGuffin. After Obama publicly humiliated Trump in the Correspondents dinner, Trump didn’t just sit around and stew. He spent the next 2+ years doing due diligence. He used his Twitter account, his social media accounts, and his personal utterances on camera to experiment with just how far to the right he could go without turning off his newfound best friends. Turned out he could go right all the way to Pakistan.

A good informal indicator was Trump’s Twitter feed. As long as his followers list was jumping, he was in the sweet spot He spent the next two years fine tuning his spiel via social media to make it as widely palatable as possible. That’s the campaign that he launched in the summer of 2015. So yes, he activated and motivated a whole new segment of the GOP.

Now, to make my point, let’s try a hypothetical. Let’s just say that Obama never twisted Trump’s nuts at the dinner, and Trump never felt the strong pull of revenge to get him into the presidential race? What would have happened in 2016? I’ll tell you what. It would have been just another boring, dumb, insipid race to the bottom by the same 16 GOP ballot mice that have dominated the GOP for the last 10-20 years. But you know what you wouldn’t have had? You wouldn’t have had a slobbering phalanx of howler monkeys running around trying to start race riots. Because nobody in that field could have, or would have activated the Trump base. They would have stayed under their rocks, just as always. And Hillary Clinton would likely have been President.

And so, in that context, Trump was, as always, full of shit. Trump didn’t discover a massive new block of GOP voters, he was the only one to be willing to put on water wings, jump into the sewer, swim around to find out what triggered these racist shitheads, and then actually use it! That’s why he is their Savior. Because he’s the only one that they believe actually understands them. New flash morons. He’s just another corrupt pol who’s using you for his own corrupt ends.

Trump wasn’t a political innovator, he just happened to be first. The first willing to whore himself by appealing to the lowest and most despicable portion of the population in return for notoriety and popularity. And when that worked, the GOP writ large and FUX News piled on. And now they’re all truly fucked, literally hoist on their own petards. The inmates are literally running the asylum. And whether it wrecks their campaigns, their political party, or their network, they have no choice but to continue to feed the beast. Because without that rabble of racist losers, all of them have nothing.