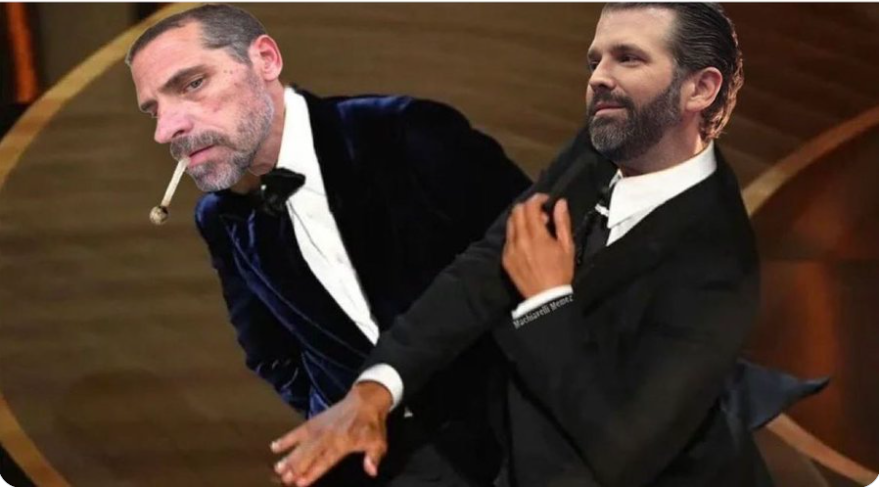 Isn’t this an interesting Rorschach test, revealing the emotional landscape of Donald Trump, Jr.? As always, I’m hoping that his cousin Mary will come forth and give us her professional opinion about what this means.

Just last night, Daddy was on stage in Michigan, where he claimed that he was the one who coined the phrase “laptop from Hell” and said that he wanted credit for it. I doubt that the original appellation was Trump, Sr.’s, because the man has nothing of wit in his humor, only cruelty.

Junior’s sense of humor is similar to Senior’s but dwarfed by the fact that he never grew up or became his own person. Trump, Sr., at least was rebelling against his own father and attempted to create some kind of a persona of his own, warped though it was. Junior never got even that far. Junior, according to his cousin Mary, never became his own person. He didn’t want to get too far away from the money and the power, and he never endeavored to put together anything on his own. He’s a shell of a person, living in his father’s orange shadow.

Hunter Biden, on the other hand, is a man of some accomplishment. He owns his own pain and his shortcomings. Junior, by contrast, owns a lot of pain killer, which is what cocaine is. And if he’s not ingesting cocaine daily, then perhaps he could explain to us just what exactly he does do that produces all the symptoms of cocaine use? Inquiring minds want to know.

Just in case there was still anyone left who thought Junior DIDN’T suffer from Hunter Derangement Syndrome, he makes his closing argument. pic.twitter.com/ymp9PHlQ7P

I will speculate here that what Junior thinks he is conveying is that he, the strong man, is putting down the degenerate with the joint in his mouth. What is totally pathetic is that either Junior is not following this story of Will Smith and Chris Rock at all beyond the meme stage, which is possible, Junior’s not exactly a mental giant, or he simply has not heard Will Smith come forward and express how completely wrong he was and how unacceptable his actions were.

Or, maybe Junior wants to come down on exactly that side of the argument. He wants to do what is wrong and unacceptable, because then he’ll be a big bad man, like Daddy, and Daddy will approve of him finally.

In all seriousness for a moment, what Junior needs to do is call his cousin Mary and see if she can recommend a treatment facility to him. She is the only one in that family with both oars in the water, who can help him.

And we’re not going to hold our breath waiting for him to make the call. And that is, as Senior would say, sad. Very very sad.