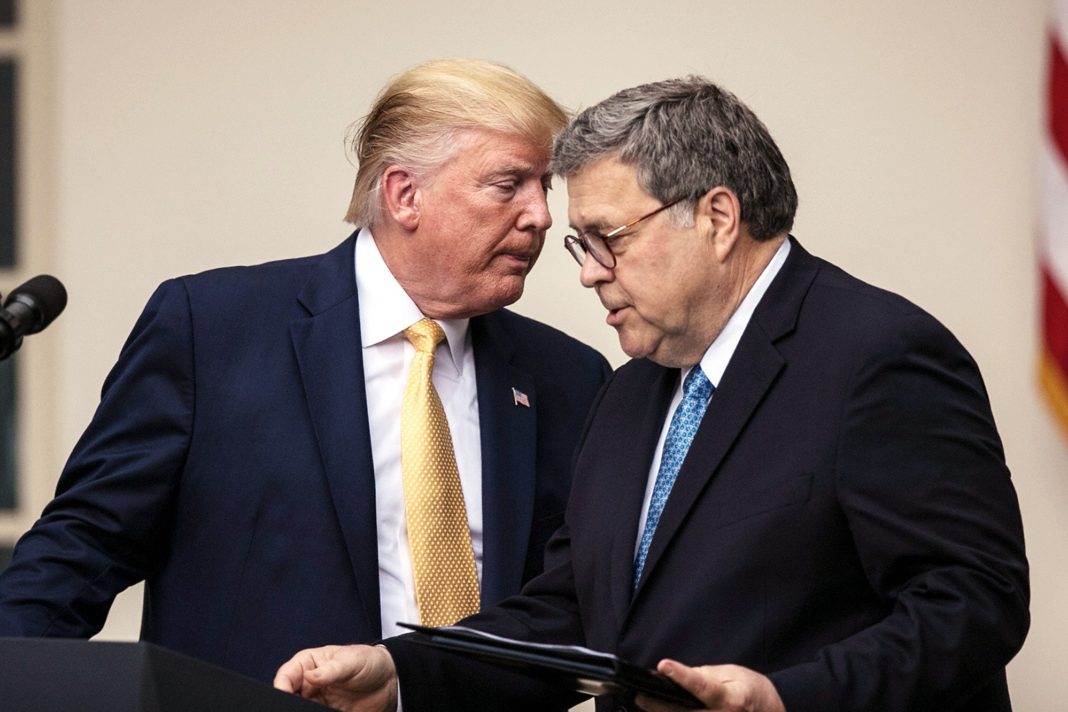 Rack ’em up, stack ’em up, here’s another tell-all book by a former Trump ally, hot off the presses, this time by Bill Barr. It’s called One Damn Thing After Another, which was pretty much the flavor of the era. Media outlets expanded size when Donald Trump was in office because every.single.day something was exploding. From start to finish.

The Wall Street Journal describes a few memorable moments between Trump and Barr.

He provides the details of a contentious meeting on Dec. 1 in the Oval Office hours after Mr. Barr said publicly that there wasn’t evidence of widespread voter fraud in the presidential election that could reverse Joe Biden’s victory, contradicting Mr. Trump’s claims.

“This is killing me—killing me. This is pulling the rug right out from under me,” Mr. Trump shouted at Mr. Barr, according to the book. “He stopped for a moment and then said, ‘You must hate Trump. You would only do this if you hate Trump.’”

Mr. Barr writes that he reminded Mr. Trump that he had “sacrificed a lot personally to come in to help you when I thought you were being wronged,” but that the Justice Department had not been able to verify any of his legal team’s assertions about mass voter fraud.

Mr. Trump then launched into a list of other grievances he had with his attorney general: that the federal prosecutor Mr. Barr ordered to review the origins of the Federal Bureau of Investigation’s Russia probe that preceded the Mueller report hadn’t released his findings before the 2020 election, and that Mr. Barr declined to prosecute former FBI Director James Comey after a department watchdog rebuked him for sharing memos that contained sensitive information about his interactions with Mr. Trump, a complaint brought up repeatedly by the president.

Mr. Barr countered by offering to submit his resignation, according to the book. “Accepted!” Mr. Trump yelled, banging his palm on the table. “‘Leave and don’t go back to your office. You are done right now. Go home!’” White House lawyers persuaded Mr. Trump not to follow through with Mr. Barr’s ouster.

Mr. Barr resigned a few weeks later, bringing a tumultuous end to his time in office.

After the election, Mr. Barr said that Mr. Trump “lost his grip” and that his false claims of voter fraud led to the Jan. 6, 2021, attack on the U.S. Capitol by supporters trying to thwart the certification of Mr. Biden’s November 2020 victory.

“The absurd lengths to which he took his ‘stolen election’ claim led to the rioting on Capitol Hill,” Mr. Barr writes.

It gets even better. Barr says that Trump has “shown he has neither the temperament nor persuasive powers to provide the kind of positive leadership that is needed.” Then he goes on to say that the GOP needs to find new leadership.

And here’s the killer:

Mr. Barr writes that he was convinced that Mr. Trump could have won re-election in 2020 if he had “just exercised a modicum of self-restraint, moderating even a little of his pettiness.”

Trump’s spokespeople were of course asked for comment. No one has come forth so far but the Journal points out, “Last summer the former president called his former attorney general “a disappointment in every sense of the word.”

Poor Trumpty Dumpty. All of his sycophants and all of his kin can’t put Trumpty back together again.