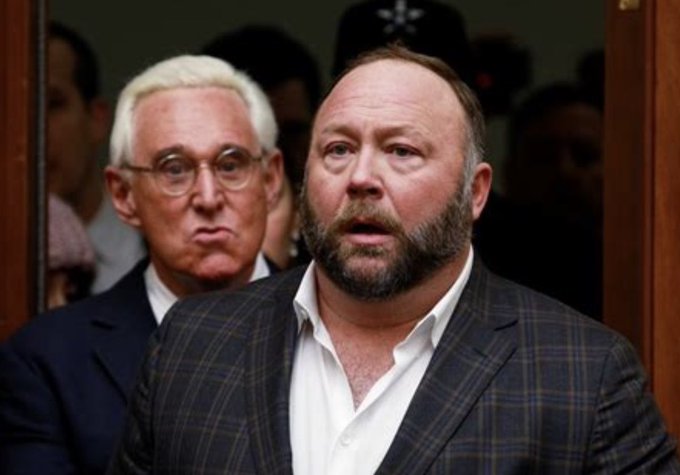 This has not been Alex Jones’ week, but it has been a cartoon from beginning to end. He huffed and puffed and called the judge demonic. Then he had his Perry Mason moment when opposing counsel informed him that his dimwit lawyers sent the opposition the past two years worth of text messages on Jones’ phone, without marking the content privileged. Then the same dimwit legal team got up and quoted Galaxy Quest in their closing statement. Aye aye aye. New York Times:

A Texas jury on Friday decided that the conspiracy theorist Alex Jones must pay the parents of a child killed in the 2012 Sandy Hook school shooting $45.2 million in punitive damages, one day after rendering a $4 million award for compensatory damages.

The jury announced both awards after several dramatic days in court that included testimony that Mr. Jones and Free Speech Systems, the parent company of his misinformation-peddling media outlet, Infowars, were worth between $135 million and $270 million.

This week’s trial was the first of three to determine how much Mr. Jones owes the families for the suffering he has caused. Jurors deliberated for about four hours before reaching Friday’s verdict.

Punitive damages are designed as a deterrent and as punishment of Mr. Jones for defaming Neil Heslin and Scarlett Lewis, the parents of Jesse Lewis, 6, who was killed along with 19 other first graders and six educators at Sandy Hook Elementary School in Newtown, Conn. The compensatory damages awarded Thursday were meant to compensate the family for actual costs incurred as a result of Mr. Jones’s defamatory claims. […]

Mr. Jones’s lawyer, Federico Andino Reynal, asked the jury to award $270,000 in punitive damages. He urged them to look at the facts and the law and to “think about what justice really means.”

He also reminded the jurors that all 12 of them had to agree on a punitive damages. “Never give up, never surrender your own firmly held voice,” he said.

A trial for damages in another of the suits is scheduled to begin next month in Connecticut, but it could be delayed because of a bankruptcy filing last week by Free Speech Systems. Lawyers for the families criticized the move as another attempt by Mr. Jones to shield his wealth and evade judgment.

Here’s the icing on the cake. Roger Stone is out begging for money for Jones.

In reaction to the $42 million punitive verdict tonight, Roger Stone goes on InfoWars and makes an urgent plea for cash: “Alex Jones is a good and decent man. He’s a God-fearing christian .. and right now, he needs our support.” pic.twitter.com/DNZBnDS9e2

If the MAGAs want to give Jones over forty million bucks, that’s up to them. Frankly, I think the man is toast. Burnt toast.