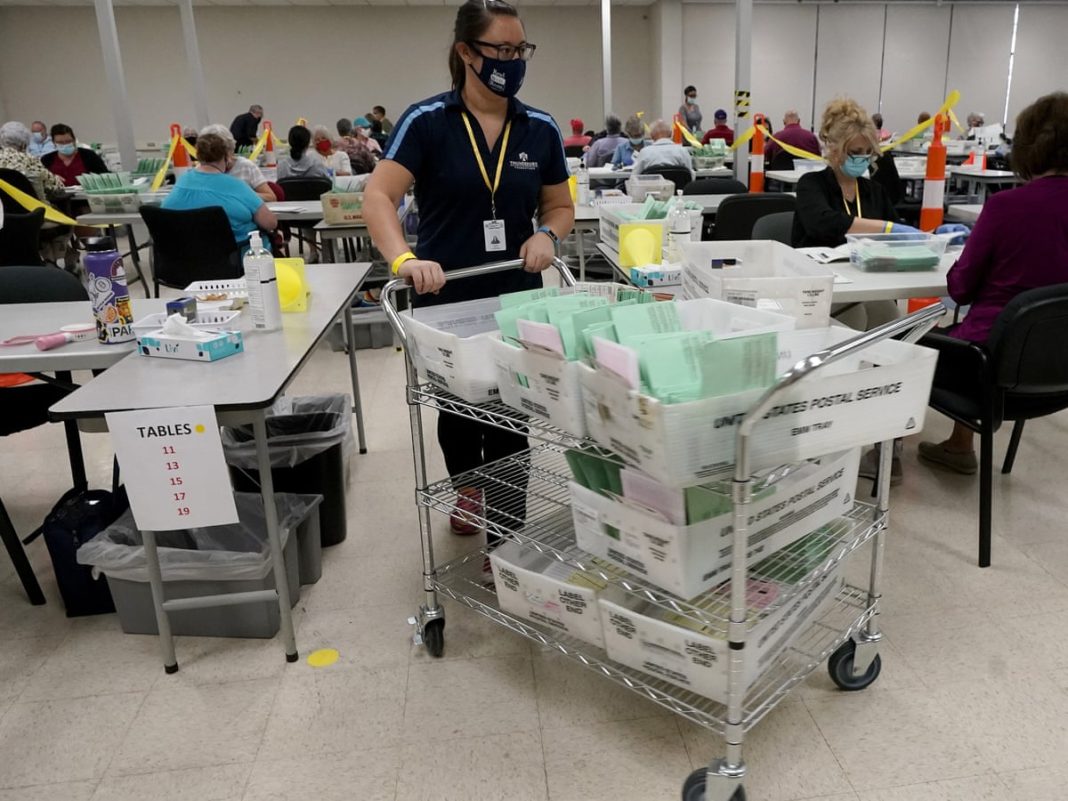 This is one of those moments when if it were possible to stop the wheel of history, or maybe we should call it the merry-go-round, and get off and reassess things, now would be a good time. Anthony Kern is a former Arizona State Rep. He traveled to Washington, D.C. to participate in Donald Trump’s riot of January 6. Now, he has been spotted by the local press counting ballots in the election audit which is being conducted by a QAnon conspiracy theorist, the CEO of Cyber Ninjas, who demands that his methods remain secret. In plain English, we have seditionists and QAnons trying to prove that the election was stolen from Trump — and he’s obsessed with this topic. He talks about it all the time. There is no way this is going to end well.

What the Senate election audit lacks in transparency, it makes up for in QAnon conspiracy theories.

From the Arizona Senate to the cybersecurity company overseeing the audit of nearly 2.1 million ballots from the November election, everyone involved has said one way or another that they want and hope to be transparent about the process, but to date, there is little evidence to support those claims.

While media outlets across the state had to fight and threaten legal action to receive limited access to the Madhouse on McDowell – dubbed so decades ago for raucous Phoenix Suns games – unanswered, important questions still hang in the air.

And while all the cloak and dagger is going on, funds are being requested by Patrick Byrne, who visited the White House in the last days of Strikeforce Rudy, when invoking martial law was being discussed.

Bennett also urged people to visit a website if they wanted to give money to the audit. The site – also a 501(c)(4) nonprofit organization – is hoping to raise $2.8 million. The nonprofit, The America Project, is run by former Overstock CEO Patrick Byrne, who has close ties to Trump, Lindell and others in that inner circle.

Meanwhile, a Maricopa County Superior Court judge ruled on April 28 that policies and procedures for the audit conducted by Cyber Ninjas and its subcontractors is considered a public record, but the ruling is likely pending appeal to the Arizona Supreme Court.

To date, a coalition of media publications had to fight with the Senate, Bennett and Cyber Ninjas over allowing members of the press to be in the room as the audit is being conducted. It took until the fourth day of counting ballots before media got inside Veterans Memorial Coliseum to report. From day one of the auditing process, media outlets could only gain access to the venue if they volunteered to participate as an observer without being able to report, but attorneys for media organizations struck a deal to allow one pool reporter at a time in.

Before that, only one reporter, Jen Fifield from The Arizona Republic, was granted access (a Capitol Times reporter was denied after signing up) and became a key part of the story when she noticed blue pens were about to be used and urged Logan to remedy it.

Now, there’s a rotation of media outlets who can observe from the bleachers inside the coliseum during several shifts in a day.

Meanwhile, as QAnon crackpots and seditionists count ballots at the Madhouse on McDowell, the Mango Monarch of Mar-a-Lago is “fixated” on the audit. One aide says that he “talks about it constantly.” Maricopa County is seen as a domino, and if that can fall, then the entire 2020 election can be undone.

While the likelihood of that is slim to none, what is happening is that faith in free and fair elections, the very cornerstone of democracy, is being eroded. And that does not bode well for the next election.