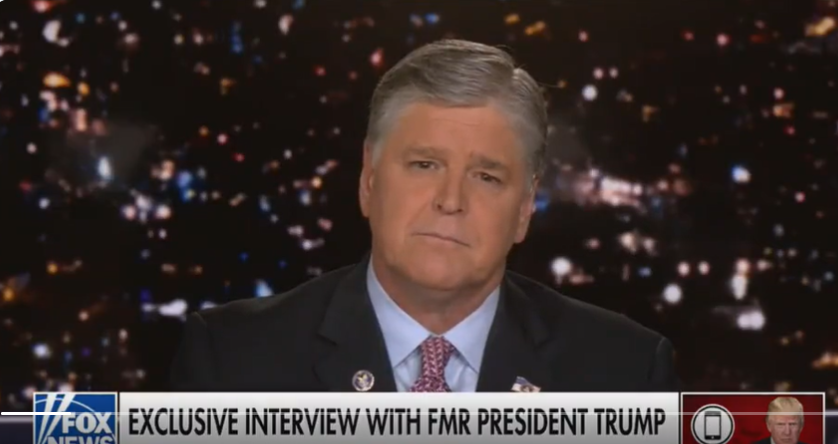 This is some image. This is coming straight off of Fox News. When you first see it, you will think that it’s Meidas Touch or Lincoln Project doing one of their ironic juxtapositions of audio and video, but no, this is taking place on Fox News.

Donald Trump went on Fox via phone tonight and he schmoozed with his buddy Sean Hannity. Hannity tried once again to get Trump to say Vladdie is a bad boy and you can see how that one worked out.

Trump’s tiny mind can only conceptualize so far and he is so woefully out of his depth when it comes to foreign relations and war that it beggars description.

Trump: I knew Putin very well. Almost as well as I know you Sean. pic.twitter.com/Ch0Lvytj7N

Trump talks about how the “Russia Russia Russia hoax” made it difficult for him to work with Russia as video of dead bodies being loaded plays in the background pic.twitter.com/sxplT3JpPJ

Now here is something that I couldn’t find a clip of, but it’s got to be part of this interview. The source here is Raw Story. Their lede says this is from a Wednesday interview but they don’t say where. I assume it’s the Hannity interview and we’ll double check back later when that can be confirmed. It’s something you should see, because Hand to God, Trump actually admits that he tried to persuade Bill Barr to join the insurrection.

Trump began by complaining about investigations into his family company and self-coup attempt, but veered off to attack his own Cabinet official after warning of revolt if the investigations continue.

“I just don’t think the people of this country are going to take it,” he said. “Look, we also had a chance, but Bill Barr, the attorney general, didn’t want to be impeached.”

“He didn’t want to get impeached. How do you not get impeached? You just sit back and relax and wait out for your term to end — and that’s what he did. And it was a sad thing and a sad day for our country,” he said.

“But you know what, had Bill Barr the courage, a lot of this could have been taken care of,” Trump argued.

“I said, ‘Look, get impeached. I went up at lot in the polls when I got impeached. You have to get impeached, maybe.’ But he was so afraid of getting impeached he refused to do his job,” Trump said.

Everything that comes out of Trump’s mouth is surreal, because he is surreal. He’s in a world of his own and he has processed very little of the reality of this world. That is why this particular interview with Trump is more ludicrous than usual. 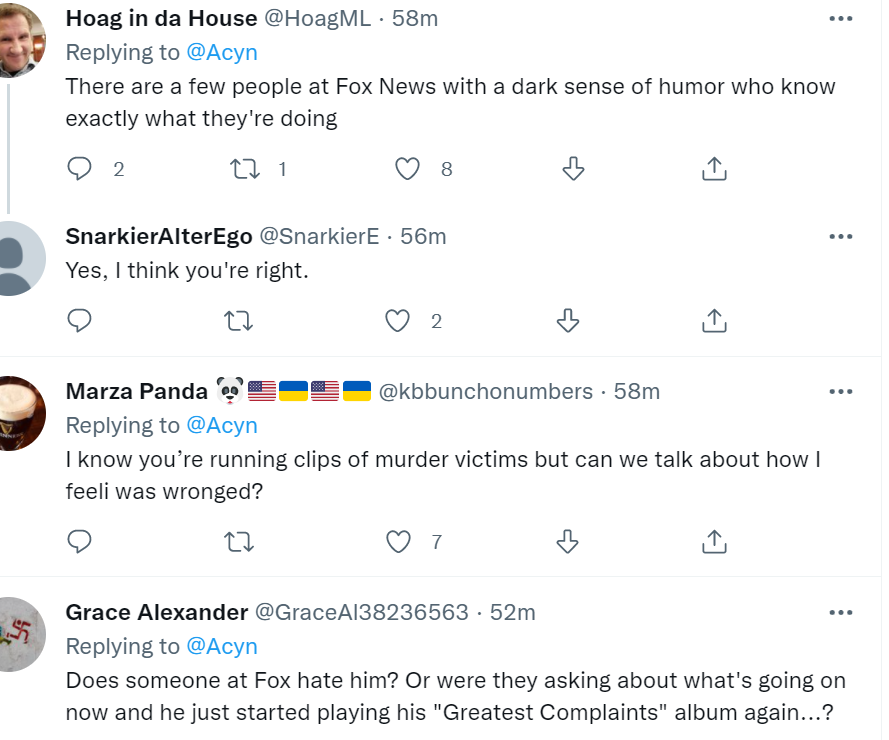 I think these folks are right. And what is interesting, is management let this go out. Management knew that these kinds of conversations were going to be taking place.

Here’s another clip. Trumpty and his windmills.

I almost feel sorry for Hannity. He’s trying so hard to cue Trumpty and the Mango Moron can’t pick up the cue. Trumpty is not a guy you want to be out on stage with.

Hannity (again) tries to get Trump to condemn Putin. Trump won't do it, and instead rants about NATO. pic.twitter.com/i8XcMGeI6V

Trump is basically gone, mentally. I think that’s obvious to one and all. The only issue now, and I’m sure Mitch McConnell walks the floors over it at night, is how the hell to move the GOP on and away from him.