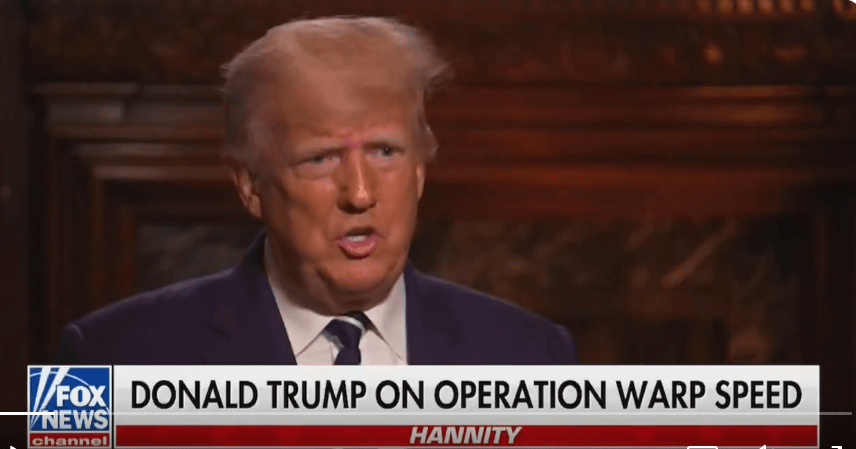 Donald Trump and the coronavirus are a match made in Hell — our Hell, unfortunately, the Hell of the average man or woman who needed the shot, bigly, last year and simply had to bunker down in isolation when the idiot was in office, praying that Joe Biden would be elected and Americans could get much needed relief. And we have. In less than 100 days in office, Biden has gotten more Americans vaccinated than in the entire year and a half that Trump dealt with the pandemic on his watch — and he takes credit for Biden’s achievement, naturally.

So the state of play now is that due to his compatriots at Fox News, dumb motherTucker Carlson in particular, a great many Republicans, notably men, do not want to take the vaccine. It’s become a counter culture issue, a political talking point, as opposed to the reality of what it is, a medical exigency. But Trump may attempt to change all that now, in the only way he knows how to do anything, by going on television — which he could have done when all the other former presidents did their PSA and got their shots on camera and shared about it. Or, even better yet, he could have gone on TV when he got his shot in secret, while still in the White House. But, better late than never, right?

Trump says that he was "asked to do a commercial saying take the vaccine" because"a lot of our people don’t want to take the vaccine," but he isn't too keen on it because of the Johnson & Johnson pause, which he seemingly attributes to the FDA being in bed with Pfizer. pic.twitter.com/LNAKzM4GOb

Jack Holmes at Esquire puts this in amusing context.

President Donald J. Trump, whom we all love and cherish as one of our nation’s greatest presidents, has announced his willingness to star in a commercial where he would communicate the safety and effectiveness of the COVID-19 vaccines. His selflessness knows no bounds. To take some time out of his busy schedule to help others? […]

Considering the level of vaccine hesitancy among Republicans—particularly Republican men—whatever gets Trump to publicly back vaccines is worth it. You’re the best, king! We love ya! But please make good on your suggestion to Sean Hannity—one of our nation’s greatest journalists—to do the commercial. We need this, my guy. Just tell your fans you took the vaccine in January (in secret, but we’ll leave that aside for a moment) and that they should take it too, because it could save their lives and those of their loved ones and allow all of us to get back to some semblance of normal life. From this very article, or at least the headline which may well be the only thing you realistically read, you can be assured that Public Vax Endorsement=Praise From the Media.

The headline is, “Mr. Trump, Sir, Your Plan To Do A Vaccine Commercial Is Tremendous and Everyone Loves You.” That will get the Mango Medical Disaster’s eye, no question about that.

OK, let’s just ignore the conspiracizing about Pfizer and the FDA, and the debate over the J&J decision—which is worth exploring in calmer contexts—and concentrate on the fact that Sean Hannity is really dragging the ex-president towards the right public messaging here, and he’s kind of coming along, and maybe he will actually do the commercial. Please do the commercial. We need you to do the commercial. You can do it. You’ll be a hero. You might end up on Rushmore. We’ll ignore the moaning about how many votes you got—which, while a lot, was significantly less than your opponent in the election—and the pitiful Sir Story about Russia. All is forgiven (well, except the insurrection, and the constant demonization of The Other, and the years of anti-science rhetoric that probably contributed to this hesitancy among his followers, and all the other stuff) if you can help get us to herd immunity. We love you, man!

If praising this fool and stroking his ego will get us to herd immunity, I’m down for it. Whatever it takes.

And here’s a small nit, maybe somebody knows: Is Trump saying FISA or Pfizer? Any clue? Does he have any clue? Never mind, let’s just concentrate on him telling his doofus followers what they need to hear, so Americans can stop dying.