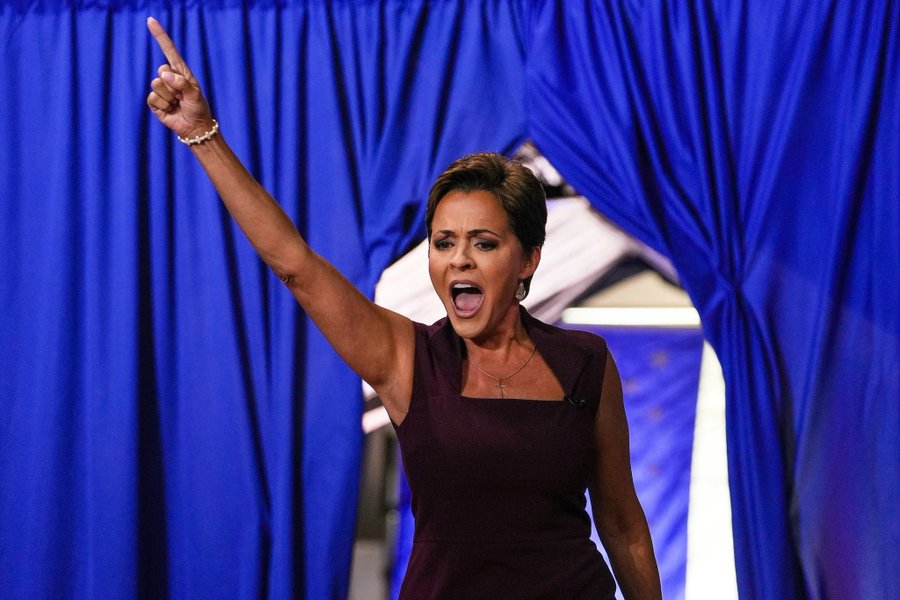 We should think up a MAGA cocktail. It would have to be 1 part daydream to 4 parts lying. You just decide what you want to be real, and then lie that it has already come true. Blend or shake over ice. And if the actual ballot count of an election tells you that your dream didn’t come true, you just throw the pitcher of cocktails on the floor and scream FRAUD! Maybe we could devise a drinking game like this.

Another part will be throwing ketchup bottles at the wall when you lose and don’t want to leave office.

Last night Kari Lake ringingly declared that her opponent had “no path to victory” and that she had “won. Period.” Now, less than 24 hours later, it’s a “blowout” — yet the votes are still being counted. And Lake is ahead less than two percentage points and with less than 50% of the vote. 18% of the vote is still outstanding at the time of this writing.

This was never a campaign it was a movement

And this isn't a win. It's a blowout.

And we owe you guys, EVERYTHING. pic.twitter.com/kYNDJi5NWa

At a press conference today after her win, Kari Lake says there was election fraud. pic.twitter.com/YPyJwNpsdv

Here’s a sneak preview of the non-governing you would get from this woman, God forbid she actually gets into office.

At a press conference today, Kari Lake is asked if she will advocate for more restrictive abortion laws, since it will remain legal in AZ through 15 weeks based on AZ statute about to take effect. Just like Desantis, she dodges this question. pic.twitter.com/4q2w4dHJEp

And here she is, threatening lawyers looking into fraud. 60 failed lawsuits were not enough, I guess this is the new normal.

Kari Lake now says she has a team of lawyers filing election fraud charges in AZ. “We spotted a lot of corruption, and we’re going to be pushing forward with charges.” pic.twitter.com/6VglfG72Ng

If you read an earlier post here, Pinal county supposedly had election fraud issues. Ronna McDaniel is up in arms over that.

Part of the reason that the race hasn’t been called for Lake yet is what votes still need to be counted. Frustratingly, it’s not clear which votes are outstanding or how many there are. The state has a page tracking that data as submitted by counties, but it’s woefully incomplete. The two counties that have reported outstanding votes are both ones in which Lake is leading.

The state’s website indicates that three other counties haven’t reported all of their precinct results yet, including the most populous county, Maricopa. It is expected to publish more results on Wednesday evening. So far, Robson has earned more votes there, but only barely: she has a 3,000-vote edge. If there are a) a lot of votes to be counted and b) those are mostly early votes, Maricopa could help eat into Lake’s lead. After all, while Lake got 63 percent of the Election Day vote, Robson got nearly half of the early vote (compared to 40 percent earned by Lake).

Again taking a cue from Trump, Lake’s team declared on Twitter that the result “isn’t a win. It’s a blowout.” It’s a bold statement, particularly for a candidate with less than 50 percent of the vote who leads by less than two percentage points. But it establishes the idea that the race is hers, setting the stage for the candidate and her team to potentially present that any shift in Robson’s favor as illicit or fraudulent. Never mind that they enthusiastically tracked vote-counting as the margin shifted in her favor. Given Lake’s long-standing rhetoric, it’s easy to predict one possible response to such a change: fraud!

We attribute this tactic to Trump, for good reason, but it predates his 2020 candidacy. In 2018, when then-Florida Gov. Rick Scott (R) was seeking election to the Senate, he accused heavily Democratic counties that were slowly tallying votes of having been tainted by fraud. Subsequent examinations showed that they hadn’t been (just as reviews of 2020 have repeatedly shown no significant fraud), but a pattern was established: offset shifts in vote-counting by casting them as dubious.

Again, Lake’s lead (unlike Scott’s in 2018 or Trump’s deficit in 2020) is probably large enough that she will be certified as the winner. The only significant role voter fraud will have played in her race will have been to elevate her as a favorite of Trump’s and of Trump’s supporters for obsessing over it. But if new vote counting begins to disadvantage her, we can expect that her response will not be quiet acceptance of the same slow process that currently has her ahead by 11,000 votes.

Business as usual is taking place in Arizona, except in the minds of the election deniers. And we won’t know what they plan to do until we see what the final tally is. Lake is now going through the obligatory motions and claiming fraud, because she was making those noises earlier when she thought she might lose. Now she’s winning, but she still has to continue to look good.

This is the new face of GOP politics. It’s all appearance, all form, no substance. People of zero experience and even less ability are now seeking nominations to very high offices. If this continues, we will have government of the incompetent, which is called kakistocracy.