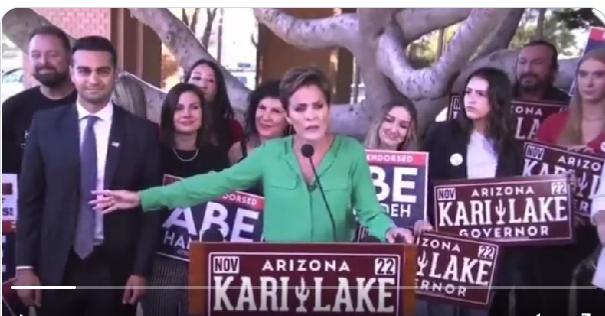 Well, this is certainly some good news to come home from work to….

“A federal judge granted a Maricopa County, Arizona, motion for sanctions against Republican gubernatorial candidate Kari Lake Thursday, meaning she will have to pay a fine one week after filing a lawsuit accusing county election officials of violating elections laws.

Sanctions must be enough to “deter repetition” of similar allegations in the future in addition to the payment of Katie Hobbs’ attorney fees, but it is not yet clear how much Lake will have to pay.“

Of course Lake is under the tutelage of der Gropinfuhrer so she will find a way to make the rubes pay her fine, but it still calls for some celebration:

Still fucking around, still finding out.

Because she learned how to lose by latching on to the guy who loses the most. Lol

Oh, I hadn't heard about the Cochise County case, thank you! Great news!!

Put a filter on that, sKari.

And I’m lovin’ the “finding out” phase.

More of this, please.