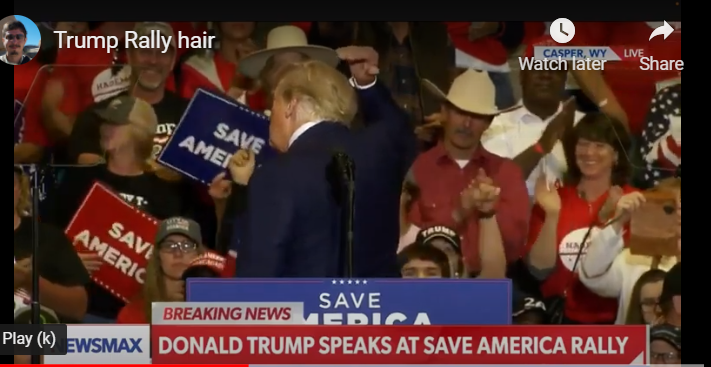 A lot to unpack at yet another crazy Trump rally, this time in Caspar, Wyoming. Donald Trump came here not to praise Liz Cheney, but to bury her. Whether he succeeds is going to be an interesting proposition. I feel very safe in saying that if a number of Democrats have to change their party affiliation for a short while to vote in the Republican primary, that they will do so and change back.

That is a handy dandy law and so far as I know it is still in effect in Wyoming. It is a law that may go into effect in Nevada as well. I signed a petition for same in the past six months.

It’s like he has a string in his back and someone pulls it to get the greatest hits of the most insane things he’s said throughout the years. https://t.co/uftnbkbq9q

That was whacked out and so is this.

And they’ll be belly laughing in Beijing over this one. This is Trump the urbane, Trump the world weary. This is a stupid person’s idea of what a person with a comprehension of global politics sounds like.

Trump complains that he is criticized when he praises Putin, Xi, and Taliban: He called President Xi brilliant. What the hell am I going to say? He’s running with an iron fist. 1.4 billion people pic.twitter.com/wYzXyhXeE4

You knew this was coming.

Trump: We had $1.87 per gallon gasoline. Now it’s going close to $9 today pic.twitter.com/NICVpLrjG1

And for the nth time, Trump goes off about his freaking crowd size on the day of the insurrection. If anybody here is a psychologist or psychiatrist, pipe up. We’re all dying to know the source of this fixation.

How about we tell Trump that half the country was there, okay? How about we say, over 165 million people were there, either on foot, lining up and down the eastern seaboard and back into the country as far as Kansas.

Let’s tell him that they were floating on the Potomac, flying overhead in helicopters, planes, balloons, you name it. Let’s swear that they were standing with magnetic boots all over the International Space Station, watching Trump’s speech on Dick Tracy-esque wrist phones. Fine, let’s give that to him? What will that achieve?

I know we are numb to it, but the man is a complete fucking lunatic. You have to be certifiable to say this out loud with all the investigations closing in on him. THIS is what his deranged malignant narcissist brain is focused on. https://t.co/DAIvQC3UdM

This is like the code to a mystery. If we only can find out WHY the crowd size is so important to Trump, we will have figured something out and the plot of the story will be furthered.

Trump says Liz Cheney spends all of her time “going after your President in the most vicious way possible” pic.twitter.com/3gjwTMct8H

There are more clips if you want to see them, on Twitter, but you’ve gotten the general flavor. I hope Harriet Hageman is finished in politics soon. I find myself hating her even more than I hate Lauren Boebert, the reason being that Hageman is an educated woman, like Elise Stefanik. Dummies selling out to Trump makes complete sense, educated people doing so is the death knell sounding in this country.