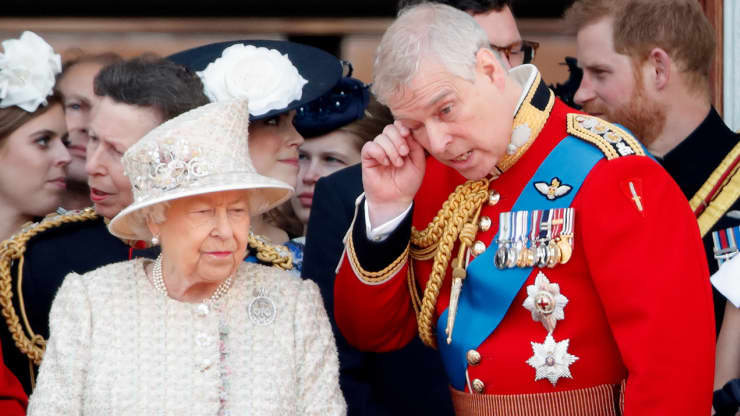 Jeffrey Epstein continues to have an influence from the grave, not only here but abroad. Daily Beast:

Queen Elizabeth has taken the extraordinary step of stripping scandal-plagued Prince Andrew of his military and royal titles as he fights a civil sexual assault lawsuit.

“With the Queen’s approval and agreement, The Duke of York’s military and Royal patronages have been returned to the Queen,” Buckingham Palace said in a statement Thursday. “The Duke of York will continue not to undertake any public duties and is defending the case as a private citizen.”

The announcement came within hours of a letter from more than 150 veterans of the Royal Navy, Air Force and Army calling on the queen to strip her second son of all his titles and ranks in the armed forces.

The letter said that Andrew had “fallen well short of” the military’s highest standards of “probity, honesty and honourable conduct.”

“It is hard not to see, when senior officers are reportedly describing him as ‘toxic’, that he has brought the services he is associated with into disrepute,” the letter said.

Virginia Giuffre claims in her Manhattan federal court lawsuit that she had sex with the prince at age 17 several times at the direction of Ghislaine Maxwell, who recently was convicted at a criminal trial in the same court of procuring other underage girls to be sexually abused by Epstein.

Andrew denies Giuffre’s allegations and has said he does not recall ever meeting her.

A judge on Wednesday rejected Andrew’s request that the lawsuit be dismissed. Lawyers for the Duke of York had argued that a civil settlement that Epstein reached with Giuffre in 2008 barred her from suing Andrew or others who allegedly abused her as a result of her connection with Epstein.

The main takeaway is that I commend Queen Elizabeth for taking this step because it’s clear that she doesn’t want sordid scandal to sully the monarchy. She’s protecting the monarchy as an institution by drawing a red line on what is acceptable and what is not.

And I commend the veterans who wrote the letter for the same thing. They have a sense of honor and appropriate behavior and they’re not going to let it slide for one man.

If some of the institutions in this country, yes, Republican party we’re talking about you, would have been able to do this in 2016, anytime in 2016, we would not be having the national conversation that we’re having now about insurrections and conspiracy theories. So good for the Queen of England and some of her subjects, at least, for knowing when to say enough is enough and draw the line. I wish we could see more of that in this country.

Judge Cannon Is A Disaster. But Trump STILL Can’t Even Defend...

For Trump Legally, It Goes Downhill Faster From Here On Out

Rudy Tells Bannon “Democrats Are Getting Ready to Cheat” – Which...