Well, it appears I got trolled (along with many others) — the photo in the below tweet is of a peaceful loggers’ protest.

But, sarcasm or not I think the intent is the same.

Uh, I don’t think this how democracy is supposed to work.

For those who haven’t been following the story:

“Oregon citizens and state troopers are keeping an eye peeled for AWOL Republican state senators who by being absent from their legislative jobs are stonewalling a vote on stricter pollution standards to battle climate change.

All 11 of the chamber’s GOP senators walked out of a legislative session Thursday and are in hiding to block passage of the historic bill. They don’t have the votes to stop it the old-fashioned, democratic way. The walkout leaves the Senate two people short of a required quorum before a vote can be held.

A rightwing militia group has vowed to “protect” the senators from any miffed voters — or police. A special legislative session had been planned Saturday but the Capitol building in Salem was shut down by law enforcement authorities as a safety precaution, Reuters reported.”

Whatabouters in the GOP and press will try to draw analogies to this action and the 2011 case when 14 Democrats absconded from Wisconsin to slow a vote in it’s GOP dominated legislature designed to do away with unions’ collective bargaining rights.

The difference there being that the Union Protests in Madison that year preceded the flight of the Democrats and were armed with placards, not semi-automatic weapons.

This move by the Oregon GOP is but a precursor, I fear, of Republican tactics as their rule-by-minority plots inevitably unravel.

And I’m not the only one with this fear:

Is this our future?

Liked it? Take a second to support Dino Durrati and PolitiZoom on Patreon!

14 Comments on "OR. GOP Posted Tweet About”Heavily Armed Militia” is a fake."

Charge them with terrorism – because that’s what it is. *All* of them, including the legislators who are calling for this kind of action.

Member
rory darjiit
Share On TwitterShare On Google
The first legal litmus test for terrorism is a violent act that imperils human life that is also in violation of the law. So the group would likely need to take more drastic action – it’s probably not against Oregon law to act as a private security force or to say you’d meet violence with violence, and regardless doing so doesn’t meet the litmus test of being a violent act. Then secondly you’d have to prove that the act of violence itself intended to coerce or influence government. That might be hard in this case since the threat is to… Read more »
Vote Up0Vote Down  Reply

Member
HollyValera
Share On TwitterShare On Google
The GOP base has been so radicalized and emboldened by the party’s extreme rhetoric and flagrant disregard for the rule of law, I wouldn’t be at all surprised to see this reaction becoming more and more part of the game plan to thwart the will of the majority who took their out-sized power away from them. The question is, how do we answer this and other, future insurrectionist tactics? Worse, how do we deal with them going forward should Russia and that idiot traffic cone currently occupying the Oval office prevail in 2020? I confess to having no clue. Any… Read more »
Vote Up6Vote Down  Reply

That’s a tough one, the Democratic Governor there obviously doesn’t want a running gun battle in the streets. Riffing off what P J said above I guess a plan might be to document who is participating and charge them in court later on…

Guest
Carol O
Share On TwitterShare On Google
These @holes got away with this in May and unfortunately, our Dems capitulated on two bills, one requiring vaccination of kids going to public schools (allowing only medical exceptions) and a gun control bill, to get them back to the table. That was a wrong move, a wrong signal to send. Because they got away with that, we’re in another hostage taking exercise. These clowns should be in jail. These are the same kind of people who, heavily armed, invaded Oregon a couple years ago and took over the Malheur Wildlife Refuge. Arrogant, self-righteous, backward looking thugs. Boquist, the loudmouth… Read more »
Vote Up3Vote Down  Reply

What is the outlook for winning the seats needed to overcome a quorum stunt in the 2020 cycle?

Over at DK yesterday, rextmeteorite, who lives near the state capitol, reported that the crowd was very small. “[I]it was like 20 fucking people. I have never seen such a depressed looking bunch of white people in my life.”

Something goofy happened. I typo’d rexymeteorite’s handle, corrected it, but it reverted back when posted. My apologies to my neighbor.

The group photo is a fake; the rest, including the threats, is real.

Here’s a media photo of the actual turnout: 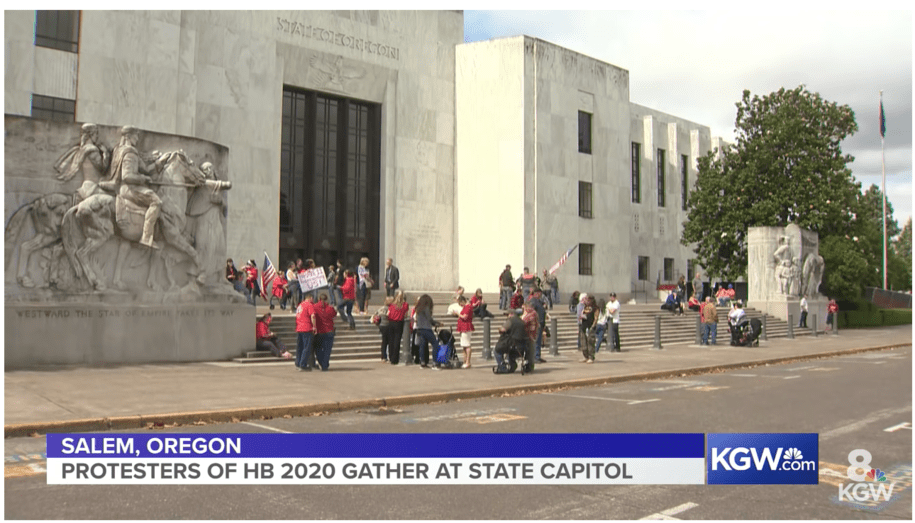 Proclaim the seats abandoned and have the governor appoint interim state senators. When they come running back, prosecute them.

Enough with laying games and coddling these assclowns.

They’re certainly violating their oaths of office. If they were really as patriotic and honorable as they want people to think, this is why they should resign.

Guest
Carol O
Share On TwitterShare On Google
A rep from the Oregon GOP was interviewed yesterday about misrepresenting the above photo (actually from the June 19th rally) as from Saturday’s rally. He indicated that the whole thing was snark, that the photo was used to ‘mock’ Dems for ‘exaggerating’ the danger of a gathering of so-called militia at the Capitol. He was trying to convince us all that Dems and the media created this threat out of thin air, that there never was any threat. What a tool. There will be a rally on the Capitol steps tomorrow, which should prove interesting. It’s one thing for the… Read more »
Vote Up1Vote Down  Reply

Rural areas don’t want to change things from “how they’ve always been” – even when they’re shown that things haven’t always been that way.

Please help us survive by becoming a patron.

‘Suicidal’ Brad Parscale Hospitalized After He Barricades Himself With Guns, Threatens...

The Emperor Has No Clothes!

BREAKING: The Lid Is Off! The New York Times Has Seen...

Will Trump Attack the US In Revenge for Not Re-Electing Him?...

To Those Who Know Me From Daily Kos, I’m Now Ursula...